Home Página Inicial | News & Events | Weaving it all together 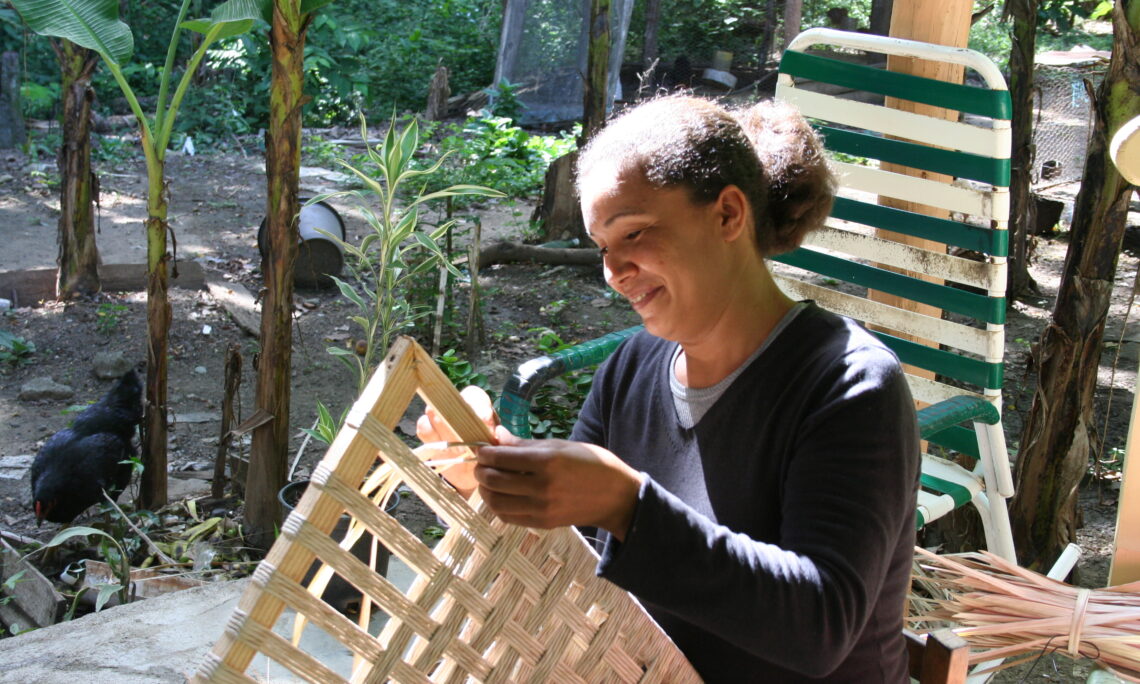 By Laura McCarthy for USAID

In the small rural village of Inoa in Dominican Republic’s Santiago Province, Angela Luna was at the point of desperation in March 2010. A mother of three, Luna left her husband in 2007 because he was an alcoholic. On her own to raise and support a family and living in a tiny, one-room shack, Angela had to find a source of income that would allow for the possibility of a better life for her children. She turned to weaving, a skill taught to her by her mother and a source of income for the women of Inoa for several generations.

With household and family responsibilities as well as a lack of transportation, the women weavers such as Angela have had their market restricted to their local furniture producers. The local companies paid very little for their products – as little as 1 peso per chair seat – meaning that with an income of approximately US$12/week, Angela and her family were well below the World Bank’s extreme poverty line of US$1.90/day per person. When Angela and the community’s weavers tried raising their prices, the local furniture companies started using fabric instead, leaving the weavers with no income at all. Luna had no other work skills aside from the weaving she had practiced for the past 20 years. “I went to construction companies, but no one would hire me because I’m a woman,” she said. “I was desperate. I was ready to beg on the streets.”

Spying a win-win situation, USAID and its local partner NGO, INDEPRO, worked together to help Angela and the other weavers as well as expand the local economy through a partnership with the private sector. Together INDEPRO and USAID trained Luna and a group of 79 other weavers – 90% of whom are women – on how to improve their product and profit. The weavers learned how to treat the natural fiber to ensure its sustainability, how to work with higher quality fibers, such as banana, and to weave new designs. USAID then linked the weavers to 40 high-end furniture companies in Santiago and negotiated with the companies to pay the weavers a fair price. Previously, the companies were paying 75 pesos/lb to import high-quality banana fiber and 80 pesos/lb when buying it on the local market. Now the companies pay 60 pesos/lb to the local weavers.

To address the issues of household obligations and a lack of transportation, USAID and INDEPRO came up with the idea of using separate components for the chairs to allow the women the opportunity to work from home. This way, the women could still watch over their children as well as work around their other household responsibilities. “Now I can work at home, I don’t have to travel far for a job. In three months I have been able to almost finish building my house.”

USAID also extended this partnership to include its work with the Dominican Republic’s banana clusters. Through the work of USAID, the banana producers agreed to provide banana fiber for free to the weavers of Inoa. This reduces production costs for the weavers and waste among banana producers. In return, the banana producers and furniture companies have been  recognized for their environmental and social responsibility and qualify for such certifications as FAIR TRADE, which can bring higher prices on the market. The furniture cluster was also developing a market for natural fiber handicrafts, which would further supplement the weavers’ income.

A truly inspiring story of perseverance, in just three months Angela Luna went from relying on her family to provide enough money for her daughters to eat to earning RD$4,500 pesos a week – approximately US$120. “My life has changed more than 80 percent,” Luna said. “I have finished building my house. My hope is to get more work and give my children a better life.”