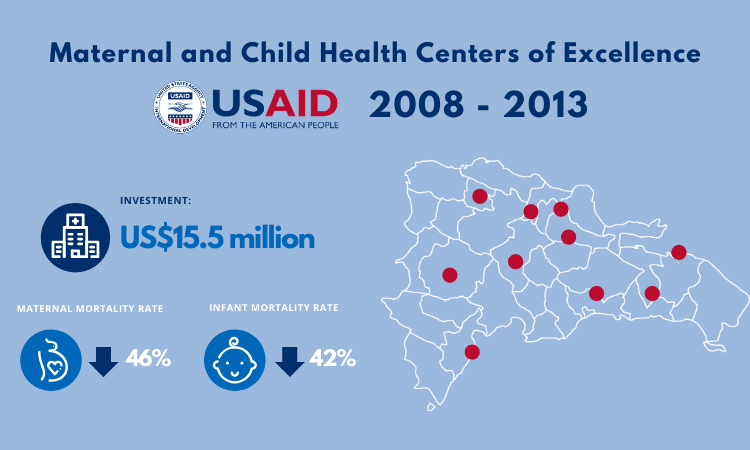 For nearly six decades, the U.S. Government, through the U.S. Agency for International Development, has collaborated with the government of the Dominican Republic and local civil society organizations, in an effort to guarantee social development and equality of opportunity. Health care has been a fundamental component of our assistance.

In the last decade, the U.S. Government has invested more than $80 million dollars to strengthen the Dominican health systems and ensure access to clean water and adequate sanitation. Among that funding includes USAID/DR flagship project “Centers of Excellence” that involved 10 participating hospitals around the country.  From 2008 through 2013, USAID partnered with the Dominican Ministry of Health for the implementation of the Maternal and Child Health Centers of Excellence, USAID’s $15.5 million dollars flagship health project. The project focused on improvements in the quality of maternal and neonatal health care in an effort to reduce maternal and infant mortality.

Over the life of the project the 10 participating hospitals contributed significantly to the country’s reduction of maternal and infant mortality rates.  These advances were accomplished by focusing on critical low-cost interventions and hospital management improvements that enhance quality and efficiency. For the country as a whole, maternal mortality fell 23 percent from 2009-2012 and specifically by 48 percent in hospitals benefiting from USAID assistance.  Likewise, infant mortality decreased by 20 percent countrywide and by 42.1 percent in the USAID supported participating hospitals.

San Lorenzo de Los Mina Hospital was especially significant.  As the second largest maternity hospital in the country, it handled close to 12,000 births a year.  Its health and administrative staff embraced change and demonstrated an unwavering commitment to improve patient care.  This hospital reduced maternal mortality by 71 percent from 2010 to 2011.