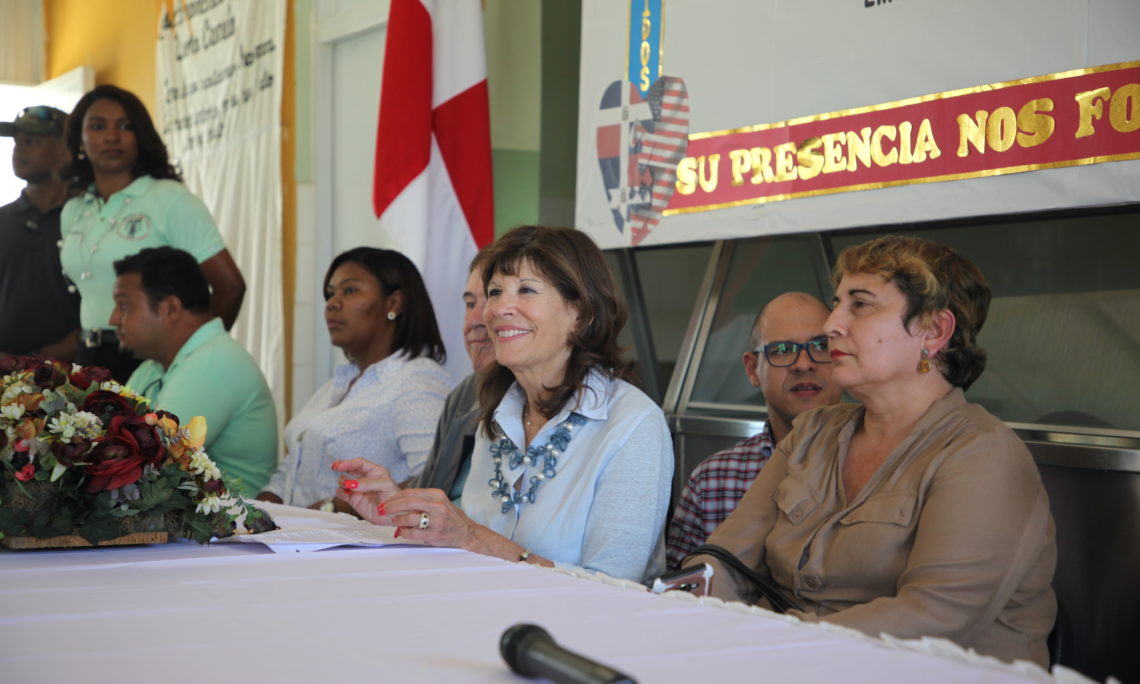 Santo Domingo, D.N. – United States Ambassador Robin S. Bernstein visited the northwest of the Dominican Republic for the first time. Her visit included the Dajabon, Montecristi and Santiago de los Caballeros provinces and sought to follow up on the projects being carried out by the United States Government in the area.

The Ambassador began her tour in the province of Dajabón, visiting the Francisco Javier Ureña School, where she was able to interact with Principal Rosa Pacheco, who was recognized as a Notable Woman 2019 by the U.S. Embassy in March. Also present were district representatives of the Ministry of Education, as well as two volunteers from the Peace Corps working in the educational center, supporting the literacy and reading efforts of children in the area.

Later, she visited the CODEVI Free Zone facilities, located on the border near Ouanaminthe, Haiti, where Fernando and Mercedes Capellán, Limber Cruz and Rafael Dominguez, executives of Grupo M and CODEVI, received her and the embassy team. This industrial park represents the largest binational investment and the largest source of employment in the border area.

She also visited the San Ignacio de Loyola Technological Institute (ITESIL), which promotes agricultural education for youth. There, she heard the details of the impact of the United States Department of Agriculture’s “PROGANA” program, such as an increase in the quality of the milk produced, the development of training programs, the development of a “demonstration” farm, among others. That same afternoon, the ambassador traveled to Montecristi, where she toured the port of Manzanillo with executives from the Dominican Port Authority, the Dominican Shipping Association, the Dominican Maritime Company and officers of the Dominican Navy, who explained the operations of the port and the most exported and imported items that pass through it.

She was then received by the Minister of Defense, Lieutenant General Rubén Darío Paulino Sem at the Copey military inter-agency post, located at the Copey-Manzanillo crossing, where she learned about the various advances and integrations in border security between security forces in the area .

In Montecristi, the next stop included a meeting with community members and executives of the Northwest Line Ecological Bananas Association (BANELINO), who receive funds from the United States Agency for International Development (USAID) to support small organic banana producers in the area. The next day, Ambassador Bernstein shared with community leader Robinson Jiménez, who works in Agrofrontera with USAID and local organizations to identify sustainable livelihood opportunities for anglers and improve community without affecting the environment.

That same afternoon, she held a meeting with Peace Corps volunteers and thus got to know first hand the different economic and community development projects that they  work on in the area.

The visit to the northwest line concluded with a buggy tour of the binational market in the company of the Minister of Defense, Lieutenant General Ruben Darío Paulino Sem, senior military commanders in the border area and the Senator of the province of Dajabón, Sonia Mateo. At the end of it, Ambassador Bernstein continued towards Santiago, where she met with important representatives of the business sector of the northern zone and AMCHAMDR executives.

In the final part of the five-day tour of the northwest area, Ambassador Bernstein met with the Mayor of Santiago Abel Martínez Durán and then with the communicator Francisco Vásquez, with whom she discussed topics of interest in the Cibao region.