Home Página Inicial | News & Events | The United States Government: supporting the Dominican Republic since the start of the pandemic 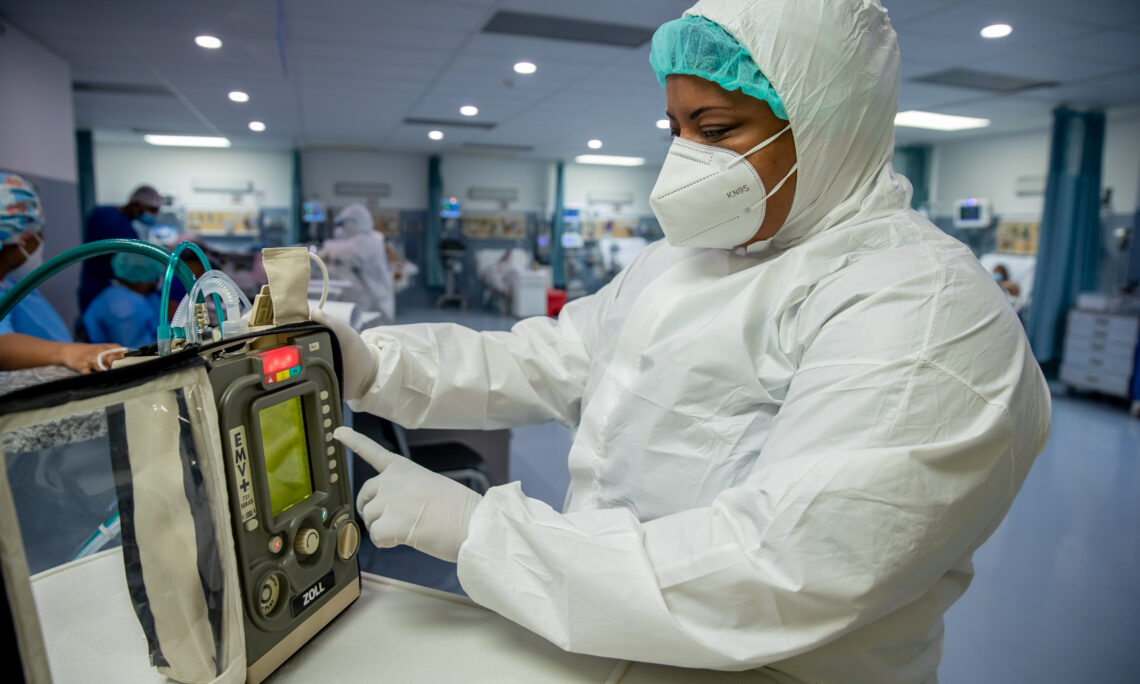 The office of the United States Centers for Disease Control and Prevention (CDC) at the U.S. Embassy in Santo Domingo has cooperated with various agencies of the Dominican Government since the beginning of the COVID-19 pandemic to support the public health system and the response to the health crisis. Since April 2020, Dr. Carmen Figueroa, a medical epidemiologist of the CDC assigned to the U.S. Embassy, has personally supported the response of the Dominican Government from the Emergency Operations Center (COE).

Since the onset of the pandemic, the COE was responsible for the coordination for preparedness and response, developing several contingency plans and action protocols, in which Dr. Figueroa participated on behalf of the U.S. Embassy.  These plans and protocols focused on preventive actions, coordination of resource management and management of COVID-19 patient transfers. When cases increased in provinces such as Duarte, Puerto Plata and Santiago, emergency response led by the COE served to improve coordination between different entities and optimize the response to the crisis.

For example, when the National Police, the municipalities, the National Institute of Potable Waters and Sewers (INAPA, in Spanish) and other institutions were engaged cleaning and disinfecting large areas, the COE helped them to plan and direct all coordination actions between all the different institutions of the National System for Prevention, Mitigation and Response to Disasters. “This coordination avoided many duplications, especially at the beginning, because in many entities there was a concern about the saturation of health systems, so the role of each entity was important,” said Figueroa. The private sector, scientific societies and community entities were also engaged in this coordination process.

One of the main roles of the COE was the coordination of patient transfers. At the beginning of the pandemic, the COE stood out for its level of preparedness and had a very important role in the transfer of those first cases and in training personnel on the correct protective measures. “At the beginning, between them and the personnel they trained, there were practically no cases among healthcare workers transferring patients, and if there were, they were very few due to the quality of the training and protection,” said Figueroa. The United States Embassy also supported this effort with the donation of suits and advanced protective equipment.

“Standardizing and centralizing the coordination of transfers was key for the initial response and patient management for COVID-19” said Figueroa. ““Patients needed to be transferred in the shortest time to authorized facilities, considering distance, severity of illness, capacity of the facility, which required a high level of national coordination with private services, and the centers that were receiving COVID-19 cases. CDC provided technical assistance to improve and strengthen monitoring systems and a secure database for tracking, triage, and placement of patients. Working closely with drivers, paramedics, doctors and nurses was key to obtaining a better understanding of the process and contextualizing our support according to their needs.”

The rapid and close collaboration that occurred between the experts of the United States and the Dominican Republic in the first months of the pandemic was possible thanks to the ties that already existed, strengthened by joint work over many years on issues such as the fight against HIV, dengue and chikungunya.

Cooperation between the United States and the COE

Various agencies of the United States Government, such as the CDC, the Department of Defense (DOD) and the U.S. Agency for International Development (USAID) have supported the COE in various areas for many years.

During the pandemic, the DOD has contributed personal protective equipment (PPE) valued at more than $225,000, which has supported the center’s work in various provinces, such as San Cristóbal, La Altagracia, La Vega, Monte Plata, Santiago, Santo Domingo, among others. Support for the COE’s COVID-19 response has also included the donation of two field hospitals in 2020 with four ventilators each, valued at more than a million dollars, as well as three additional hospitals in 2021 that were announced in the recent visit by the head of the U.S. Southern Command, Admiral Craig Faller, worth $2.8 million.

In addition, cooperation at a general level in the last ten years includes four mobile operations centers, valued at $1 million, two of which were donated during Admiral Faller’s recent visit, and equipment for the generation and provision of electricity and equipment for emergency responses. In addition to donations, cooperation has included joint training and exercises, in order to ensure a high level of preparedness for different types of disasters. The value of the projects carried out by the Department of Defense in support of the COE since 2012 exceeds two million dollars, and upcoming donations will exceed five million dollars.

Another key institution in the U.S. Government’s support to the Emergency Operations Center has been the U.S. Agency for International Development (USAID). Two important examples of their contributions in the last ten years are the donation of 1.6 million dominican pesos (28,104.69 dollars), through a memorandum of understanding, for the formation of a search and rescue team in collapsed structures; and the sponsorship of the AlertCOE mobile application, which allows alerts issued by the COE to be received by smartphone users. To date, the application has more than 10,000 downloads.

During the COVID-19 pandemic, USAID support includes the donation of biosafety materials valued at $30,000 to the Provincial Prevention, Mitigation and Response Committees, which are made up of the Civil Defense, Governments, the Red Cross and various public institutions.