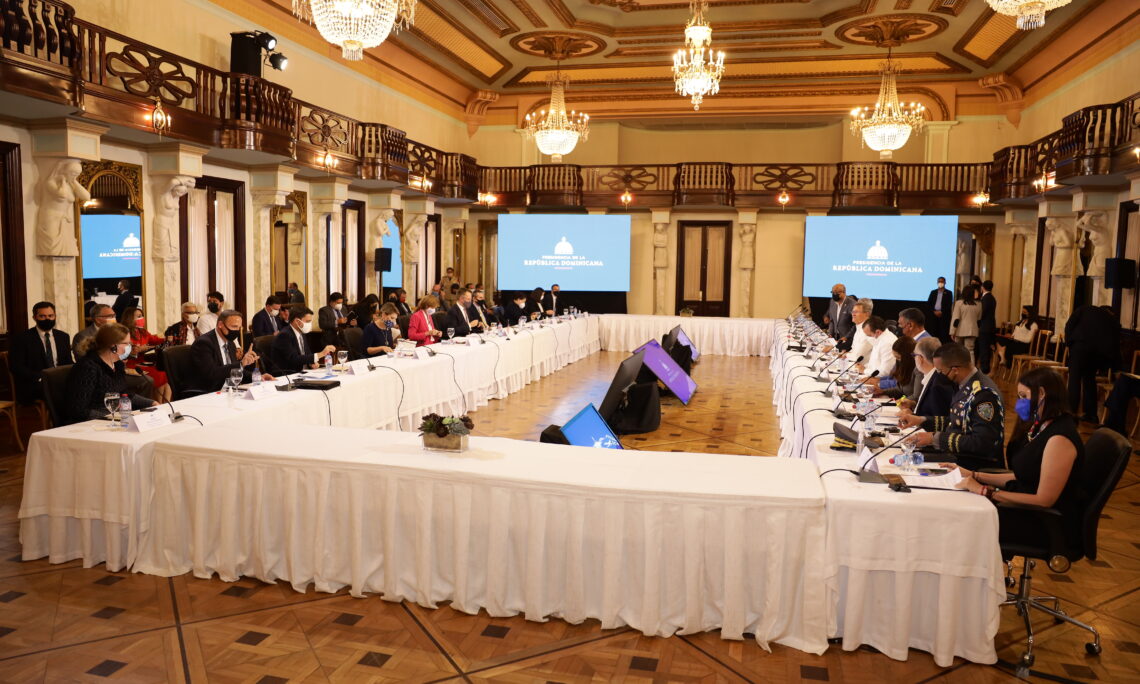 The working groups that comprise the second dialogue demonstrate the United States’ steadfast support for the Dominican Republic’s efforts in advancing institutional reforms.

Santo Domingo, D.N. – On Thursday, October 7, 2021, Dominican and U.S. government authorities held the second High-Level Dialogue on Institutional Reform under the leadership of Dominican President Luis Abinader and Administrator of the United States Agency for International Development (USAID) Samantha Power.  During the dialogue, the group evaluated the progress made in the different work areas agreed upon during the first high-level dialogue held on April 28, 2021, which was co-led by President Abinader and Chargé d’Affaires, a.i. of U.S. Embassy in Santo Domingo Robert Thomas.  The U.S. and Dominican officials also reviewed next steps for each subject, discussed the Summit for Democracy announced by President Biden, and considered additional work areas to be included in future high-level dialogue meetings.  President Abinader reiterated his commitment to the implementation of a series of institutional reforms that will advance human rights, democracy, and transparency for Dominicans everywhere.

Progress since the First High-Level Dialogue

President Abinader committed to the implementation of the following institutional reforms, which were also discussed at the High-Level Dialogue meeting in April:

President Abinader also discussed with Administrator Power the possibility of integrating new reform commitments into the High-Level Dialogue process, including:

Administrator Power congratulated President Abinader on the progress his administration has made so far across a broad range of reform efforts and reiterated the U.S. Government’s commitment to support these reforms.  The two sides also agreed to identify additional ways that the United States might support President Abinader’s other reform priorities.  This could include:

Administrator Power discussed the Summit for Democracy, announced by President Biden on August 11.  This event will bring together leaders from a diverse group of the world’s democracies for a virtual Summit in December to be followed by a second, in-person Summit.  The virtual Summit, which will take place on December 9 and 10, will galvanize commitments and initiatives across three principal themes: defending against authoritarianism, fighting corruption, and promoting respect for human rights.  Following a year of consultation, coordination, and action, President Biden will then invite world leaders to gather once more to showcase progress made against their commitments.  During the Dialogue, President Abinader emphasized the Dominican Republic’s support for the objectives of the Summit for Democracy and noted that the reform commitments he announced both at the original iteration of the Dialogue and the second session today align with major themes of the Summit.

This second High-Level Dialogue demonstrates the United States’ unwavering support for the Dominican Government’s efforts in priority areas of reform and reflects the longstanding cooperation between both countries grounded in our shared values of democracy, transparency, and respect for human rights.  The participants agreed to convene the next High-Level Dialogue in early 2022.

Administrator Power also stated at the dialogue that based on progress made so far across a range of reform efforts led by the Dominican government, the U.S. Government, through USAID, has made available $7.9 million of new assistance since the last High-Level Dialogue in April.  This funding will support the reform of Government oversight entities, implementation of the National Citizen Security Strategy, procurement reform, and energy sector reform.  Additionally, the U.S. government will support Dominican National Police accreditation and other key institutional transformations through a new $1.45m regional grant.