Home Página Inicial | News & Events | The U.S. and the D.R.: Partners in Agriculture 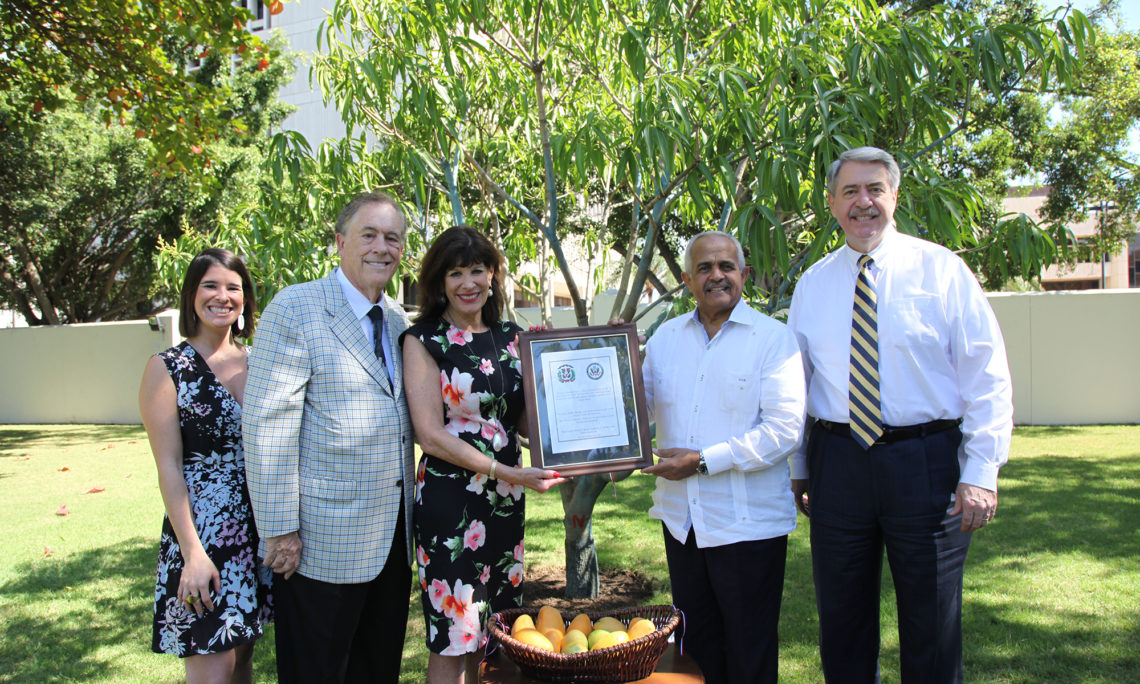 Earlier this month, the U.S. Department of Agriculture’s Under Secretary for Trade and Foreign Agricultural Affairs Ted McKinney visited the Dominican Republic to see first-hand the mutually beneficial partnership that has developed between our agricultural sectors.

Under Secretary McKinney was struck by the fact that approximately 60 percent of U.S. agricultural exports to the D.R. are used as inputs by the Dominican livestock sector and food processors.  He and I saw multiple examples of this while touring a major supermarket: local poultry and pork raised with U.S. feed and pan de agua or water bread made with U.S. wheat.  Many of these items cannot be competitively produced in a tropical climate such as the D.R. and support tens of thousands of jobs for Dominicans.

The United States is also committed to helping Dominican farmers.  For example, the U.S. Government has spent $110 million to help Dominican farmers be more competitive and to implement CAFTA-DR.  The United States remains the D.R.’s number one trading partner and export market in agriculture and strongly believes in the importance of two-way trade.  Through technical exchanges and trade facilitation, CAFTA-DR has deepened our bilateral relationship, resulting in a significant increase in the D.R.’s agricultural exports to the United States.

For example, under CAFTA-DR, the U.S. Department of Agriculture funded the Exporta Calidad program, which is increasing the quality and competitiveness of five Dominican products identified by the National Competitiveness Council.  Under this program, Dominican avocado exports to the United States have grown 140 percent, and were already up 19 percent during the first ten months of 2018.  Another key success has been the development of beneficial insects known as “pirate bugs,” which reduce the use of chemicals and substantially decrease the number of tiny pests that harm exports of oriental vegetables.  The program is also helping to increase exports of Dominican green-skinned avocados, pineapple, fine flavor cacao, and greenhouse vegetables.

One of my main priorities in the country is to make sure we plant seeds of friendship and leave behind tokens that symbolize our strong bilateral relationship.  During his visit, Under Secretary McKinney, Minister of Agriculture Osmar Benítez, and I formally inaugurated a plaque memorializing a mango tree that Minister Benítez donated to the Ambassador’s residence.  Given that the mango tree roots can grow almost 20 feet into the ground, this tree serves as a metaphor for how the United States and the Dominican Republic are intertwined.  Just like the mango tree planted at my residence, CAFTA-DR continues to bear fruit and is a positive win-win for both sides.  Estamos Unidos!

We applaud Minister Benítez’ leadership as he works to increase the DR’s agricultural exports to the United States and other markets, building upon the success of U.S. programs to modernize the Dominican agricultural sector.  Since I have fallen in love with Dominican mangos, we are especially pleased to see that the National Competitiveness Council identified mangos as one of 10 competitive agricultural products with the potential to increase exports.  When visiting my family in the United States, I look forward to seeing more Dominican mangos on the shelves!  While I am here though, we look forward to watching that mango tree grow and bear fruit along with our strong bilateral trade partnership.