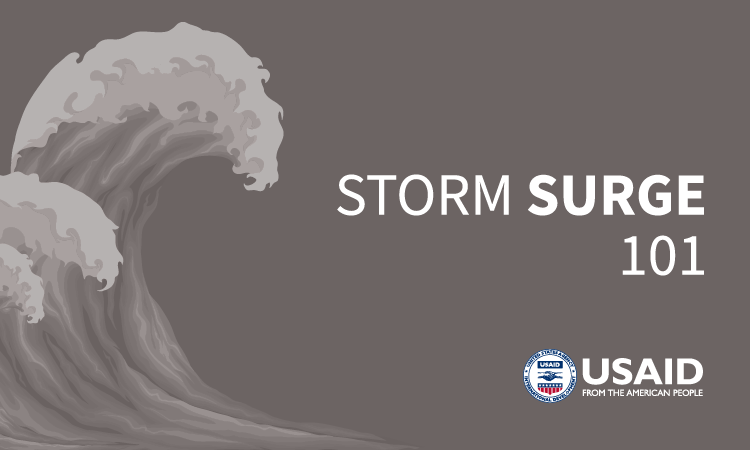 When hurricanes barrel close to communities, many people’s first instincts are to protect themselves from the high winds that threaten to flatten homes and snap trees in half. But, in fact, storm surges — or rising waters created by the storm — pose a far more dangerous and deadly threat.

What is Storm Surge?

In September 2019, Hurricane Dorian made landfall in The Bahamas as a Category 5 storm, making it the strongest hurricane in modern history to hit the island nation and only the fifth Atlantic hurricane on record to achieve such an intensity. The storm destroyed infrastructure and affected more than 76,000 people.

While the 180+ mph winds caused damage, it was the storm surge, or rising water, that rose more than 20 feet above tide level and devastated most communities. That’s equivalent to reaching the top of a two story house! Hurricane Irma in 2017 also led to devastating storm surges in the Caribbean, reaching roughly eight feet above tide level in Antigua and Barbuda, and up to 20 feet in Cuba.

Meet one of our USAID experts

USAID Hydrometeorological Advisor Sezin Tokar provides technical advice to our disaster experts on how to prepare, respond, and reduce risks related to weather, including hurricanes and floods. Here she explains why storm surges are such a threat:

What is USAID Doing to Protect Against Storm Surge?

To reduce the threat of devastating storm surge, USAID is working with the National Hurricane Center, national meteorological services, and disaster management agencies across the Caribbean to launch a new program to advance early warnings of storm surges and strengthen preparedness across this vulnerable region.

Under the U.S.-Caribbean Resilience Partnership, this program will develop maps to assess and visualize storm surge risk, as well as strengthen capacity for early warnings in the countries across the Caribbean. Paired with early warning systems, this storm surge mapping program will help Caribbean countries ensure they are ready for weather threats and can respond quickly by providing forecasts and early warnings that will help emergency managers, first responders, governments, businesses, and the public identify who is most at-risk and make smart and timely decisions.

This program has already been rolled out in Hispaniola and is in development in Belize and Cancun, Mexico. USAID and the National Hurricane Center have also already developed storm surge forecasting and early warning systems for the Dominican Republic and Haiti, which will be tested for the first time during the 2020 Atlantic hurricane season. USAID and the National Hurricane Center plan to expand the program to the other countries in the Caribbean in coming years.

USAID works year round to reduce the risk and impact of disasters — including hurricanes and related threats — in Latin America and the Caribbean. This storm surge mapping program adds one more critical tool to the toolbox for local governments and humanitarian organizations working on the ground to prepare communities at risk before the next storm hits.