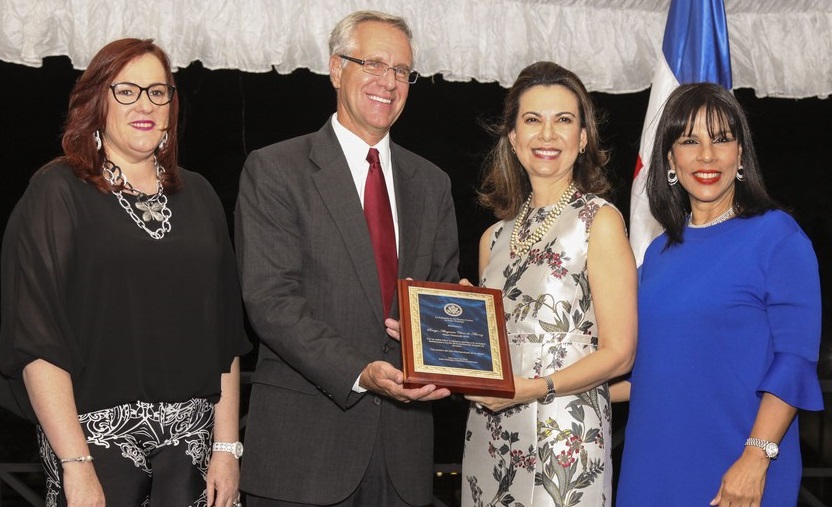 Santo Domingo, DN- The Chargé d’Affaires a.i. of the United States Embassy in Santo Domingo, Robert Copley, hosted an International Women’s Day reception on March 8 where he recognized Soraya Checo de Álvarez as the Embassy’s 2018 “Mujer Destacada” (Notable Woman). Checo was selected for her hard work and valuable contributions in the comprehensive education of children and youth in the Ciudad Santa María Community Educational Center.

During the reception, Chargé d’Affaires Copley stated: “there are many examples of Dominican women who inspire others to have the courage to take action on behalf of those most vulnerable or take action to make the world a better place.”  He highlighted Mrs. Checo’s work to offer vulnerable youth the possibility of a bright and prosperous future.

Soraya Checo thanked all the Ciudad Santa María Community Educational Center collaborators and  the United States Embassy for the distinction. “We can all work to have a more inclusive and different world, and the change must start with ourselves. I’m not saying this out of naivety, let’s be clear, everyone, to be truly happy, needs to shed their prejudices and help others,” said Checo upon receiving the award.

Mr. Copley bestowed a plaque acknowledging Soraya Checo de Álvarez’s work in the presence of other notable women from different backgrounds and professions in attendance.

Soraya Checo de Álvarez became the first woman recognized with the “Mujer Destacada” (Notable Woman) award by the U.S. Embassy.  A panel comprised of State Department Fulbright and IVLP program alumni evaluated all nominations and considered Checo’s nomination stood out for her commitment to education and development in low-income communities in Santiago.

About the Notable Woman Award

The “Mujer Destacada” (Notable Woman) award is part of a social media campaign of the same name in which the U.S. Embassy shares the stories of Dominican women who are fighting tirelessly for the improvement of their communities, generating a positive impact, and making significant contributions to society. For more information look for the hashtags #MujerDetacada2018 and #DestacadasRD.