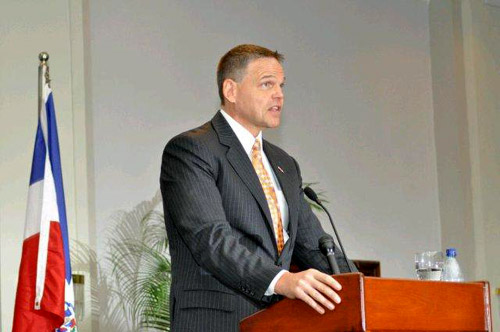 First, I am happy to announce, as many of you already may know, that Ambassador Wally Brewster arrived in country yesterday and looks forward to taking up his official duties once he presents his credentials to President Medina.

As many of you know, tomorrow is Thanksgiving in the United States, and we will give thanks for the many good things in our lives – our families, our friends, our work, our homes, our businesses.  And in that spirit, I want to thank you for inviting me here to share a few words, as we usually do at this time of year.  We also honor at Thanksgiving the Pilgrims who came to our country seeking religious freedom, and the Wampanoag Indians of Massachusetts who helped them through their first terrible winter in the new world.

Throughout this hemisphere, we have much for which to be grateful.  Our bonds of trade and culture continue to grow stronger as do our beliefs in institutions, rule of law, human rights, and democracy.  The Americas as a region has become more democratic, more prosperous, and more connected and integrated politically, economically, and culturally than ever before.  This is especially true of the relationship between the United States and the Dominican Republic.  The U.S. is the number one market for Dominican exports, and has been the number one source of foreign direct investment here over the last 20 years.  Since the implementation of DR-CAFTA, bilateral trade is up 16%.  We are neighbors and friends in every sense.  There are about 200,000 Americans living in the DR, and almost 1.5 million more travel here each year.  And there are almost 1.5 million Dominicans living in the U.S.  Our ties are strong.

While we have much to be grateful for, we also face important challenges which we must address together.  It has become painfully clear that first among these is global warning, and the challenge it poses to sustainable economic development.

I recently saw a rather astounding film entitled Chasing Ice by renowned National Geographic photographer James Balog, which powerfully demonstrates the reality of global climate change.  Using time lapse photography, the film documents the amazingly rapid destruction of Arctic glaciers which have more or less remained unchanged for a thousand years in Greenland, Iceland and Alaska.  In three years, we see glaciers retreat from ice-mountains to expose the rocks beneath.  One glacier loses the height in ice of the Empire State Building.  Another calves an iceberg the size of lower Manhattan into the sea in just a few hours. To paraphrase filmmaker Balog’s conclusion: “I began this project because I wanted to have an answer for my children (and their children) when they asked this question – ‘What were you doing about climate change when we were young?’”  Perhaps we should all consider that question?   Will we leave our children and grandchildren a planet that is healthy, clean and sustainable?

Now some might think, here on this lovely island in the Caribbean, what do melting Arctic glaciers have to do with us?  But we know melting glaciers have a direct effect on rising sea levels.  And island nations like the DR, with its spectacular beaches and its world-class tourism industry, are increasingly vulnerable.  In the last decade, global sea levels have risen at twice the rate they did in the previous 100 years, and a recent study by the World Bank notes that Santo Domingo will be the fifth most vulnerable city to rising ocean levels in the coming years.   We are all troubled by the news about the devastating effects of increasingly common “super storms,’ such as Typhoon Haiyan in the Philippines and Hurricane Sandy in the U.S.

We must change now.  Our economic models must change.  We must reduce our dependence on carbon-based fuels and shift our energy matrices toward renewable and cleaner sources.  I understand that the U.S., with our huge economy and heavy reliance on fossil fuels, must lead this change and has much work to do.  We have made important progress.  Since President Obama took office, we have doubled the electricity we generate from wind and the sun.  We are on track to double the average mileage-per-gallon for our cars by 2025.  Today, we use more clean energy, meaning renewables and natural gas, and waste less energy, then ever before.  Our greenhouse gas emissions have fallen back to the levels of 20 years ago, while our economy is 60 percent larger.  We’re also producing more cleaner-burning natural gas than any other country on Earth.  We’ve learned from Hurricane Sandy and other disasters that we’ve got to build smarter, more resilient infrastructure that can protect our homes and businesses, and withstand more powerful storms.  That means stronger seawalls, natural barriers, toughened power grids, hardened water systems, and reinforced fuel supplies. That’s why President Obama unveiled a new Climate Action Plan to drive more aggressive domestic policy on climate change than ever before.

What about the DR?

Right here, in the Dominican Republic, we are exposed to many natural hazards including hurricanes, earthquakes, floods, and landslides.  The DR is ranked as one of the ten most vulnerable countries worldwide when it comes to effects of global climate change.  Rising sea levels, warmer weather, gradual reduction in water quality and quantity from salinization of aquifers, and more frequent flooding are global climate change symptoms that are already being felt here.  Another major threat to coastal communities and the tourism industry is the continued loss of coral reefs, mangroves, and wetlands that protect the country’s 1,600 kilometers of beaches from storm surges.  Virtually all of the Dominican Republic’s critical marine resources are at risk, and more than 70 percent of coral reefs are dead.

In 2010, the World Resources Institute determined that this country is losing beaches at a rate that could directly lead to the loss of between $52 and 100 million worth of private sector investments made in beachfront tourism facilities.  Not only does this put the homes and lives of people in Santo Domingo and other coastal communities at risk, but it poses yet another significant threat to tourism.  This is particularly significant given that “beach quality” is often cited by tourists as one of the key reason for visiting the country.  In 2012, the tourism sector was one of the areas of greater dynamism in the Dominican economy, comprising almost ten percent of GDP, reporting revenues of $4.5 billion, and generating over 200,000 jobs.

Fortunately, President Medina and the private sector have launched some important initiatives, and the DR is not alone in facing this challenge.  The President is working to diversify the energy sector to reduce the country’s reliance on imported petroleum, and we believe DR-CAFTA can play an important role.  The GODR has put in place a National Development Plan to design and implement land use plans using integrated risk management, regulate land use, and encourage the sustainable use of natural resources. The strategy also prioritizes water source protection and protection of coastal marine resources.

Where does the Embassy come in?

Promoting sustainable development is a key foreign policy objective of the U.S. government.  Let me give you a few examples of where we are working together.

Under the Energy and Climate Partnership of the Americas (ECPA) program for Sustainable Energy in the Caribbean, the U.S. supports electrical interconnections in the Caribbean.  Caribbean countries face some of the highest energy prices in the world.  This is a huge drag on growth.  But they also have attractive options for generating clean energy with wind and solar, and the DR has been a leader, for example developing large new wind farms in Los Cocos and Quilvio Cabrera near Barahona.

The cost of electricity in the Dominican Republic is more than 2.5 times the average cost worldwide.  One of the major challenges for the DR is the high cost of imported fossil fuels for electricity generation.  Fortunately, because of its membership in DR-CAFTA, the Dominican Republic can take advantage of an expedited, less bureaucratic process to import clean U.S. natural gas, unlike most other countries without free trade agreements.  As the DR seeks to secure supplies of cost-effective and cleaner-burning natural gas, DR-CAFTA will afford the country significant benefits in the medium to long-term.  This access to energy along, with the DR’s advantaged geographic position and excellent port facilities, close to the Panama Canal and the wealthy markets of Europe and North America, add to its competitive potential in a world where shipping costs play an increasingly important role.

We are working with the Dominican national government by providing expertise and technical assistance to incorporate climate-related planning.  Last month, we celebrated the graduation of 100 municipal planning professionals from a land use planning and climate change adaptation certificate program.  The Embassy, through the U.S. Agency for International Development (USAID), has water and land use projects with local governments in Santo Domingo, Santiago, Samaná Province, and Jarabacoa, to name a few.  We are working with Dominican NGOs to restore coral reefs in Bayahibe and Sosua, and will soon expand the program to Montecristi, Punta Rusia, and Samaná.

The private sector has become more active in the arena of climate change adaptation. Many high-end resorts are leading the way with recycling programs, while ports are composting trash.  This country has world-class tourism infrastructure and management, and many entrepreneurs are exploring ecotourism as an important future niche. A good example of public-private partnerships is the tourism clusters that USAID is helping to develop.  Begun in 2012, the goal of this $2.5 million pilot program is to construct sustainable models of eco-friendly tourism development.   Ten clusters have been established to date.  Together we are creating coalitions to work jointly on environmental issues, such as coastal protection and beach restoration.

The bottom line is that the global warming challenge requires active participation and concrete actions by all levels of government, civil society, and you, the private sector.

Last week Secretary of State Kerry gave a speech at the Organization of American States where he emphasized global climate change and the need to act.  It requires each of our nations to make fundamental policy choices and to embrace the energy of the future over the energy of the past.  And I am well aware that this is not an easy choice for any of us to make.

But believe me:  Climate change is real. It is happening.  And if we don’t take significant action – as partners – it will continue to threaten not only our environment and our communities but our entire way of life.

The challenge of climate change will cost us far more if we fail to address it than the investment we make today to meet it.  Our economies have yet to factor in the monetary costs of doing nothing – the devastating effects on tourism, food sources, infrastructure, and indeed, civil order and society.

So the question for all of us is: Will we have the courage to make tough choices, and the willingness to change.  Will we leave our children and grandchildren a planet that is healthy, clean and sustainable?  Will we be able to look our children in the eye and answer the question – ‘What were you doing about climate change when we were young?

Thank you very much.