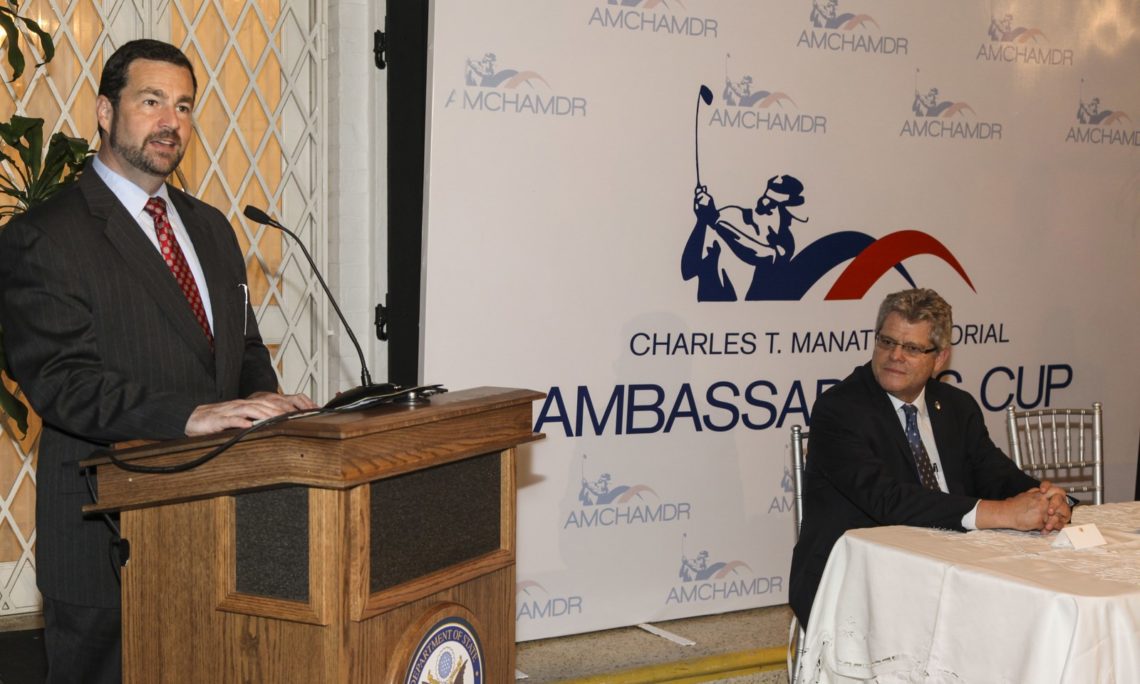 During the Ambassador’s Cup 17 Press Conference

-Members of the AMCHAMDR Board of Directors

– Distinguished members of the American Chamber of Commerce

– Members of the press

We are delighted to be here with you this evening, formally announcing the celebration of the XVIII version of the Ambassador’s Cup golf tournament.

This initiative by the American Chamber of Commerce Dominican Republic with the support of the U.S. Embassy in Santo Domingo has become a tradition in the Dominican business community.

The Ambassador’s Cup is an excellent example of the ties that unite us with the Chamber, a relationship established and strengthened over decades of working together promoting trade and investment agendas between the two countries.

Once again we host a new Ambassador’s Cup Tournament, in memory of an Ambassador who left his mark during his time in Dominican Republic. As lawyer, politician, businessman and diplomat, Charles Taylor Manatt set a benchmark that serves as an example to the people and countries with whom he interacted. His legacy transcends the solid foundation of his personal and family life. This is demonstrated as, 5 years after his physical passing; we continue to remember the life and work of Ambassador Manatt together with his loved ones, whom accompany us today, friends and acquaintances.

The tournament is a good way to remember someone who served as a nexus and fully exercised what we call economic diplomacy, allowing the bilateral trade between the United States and the Dominican Republic to flourish, as well as the harmony and friendship between the two countries. The Ambassador’s Cup is a symbol of our commitment to continue the diplomatic work that unites, brings closer and yields benefits.

On March 25, we will all gather under this theme for the Ambassador’s Cup.

Thank you for joining us at this press conference, our next appointment is on the golf course. We hope to see you there. Goodnight!