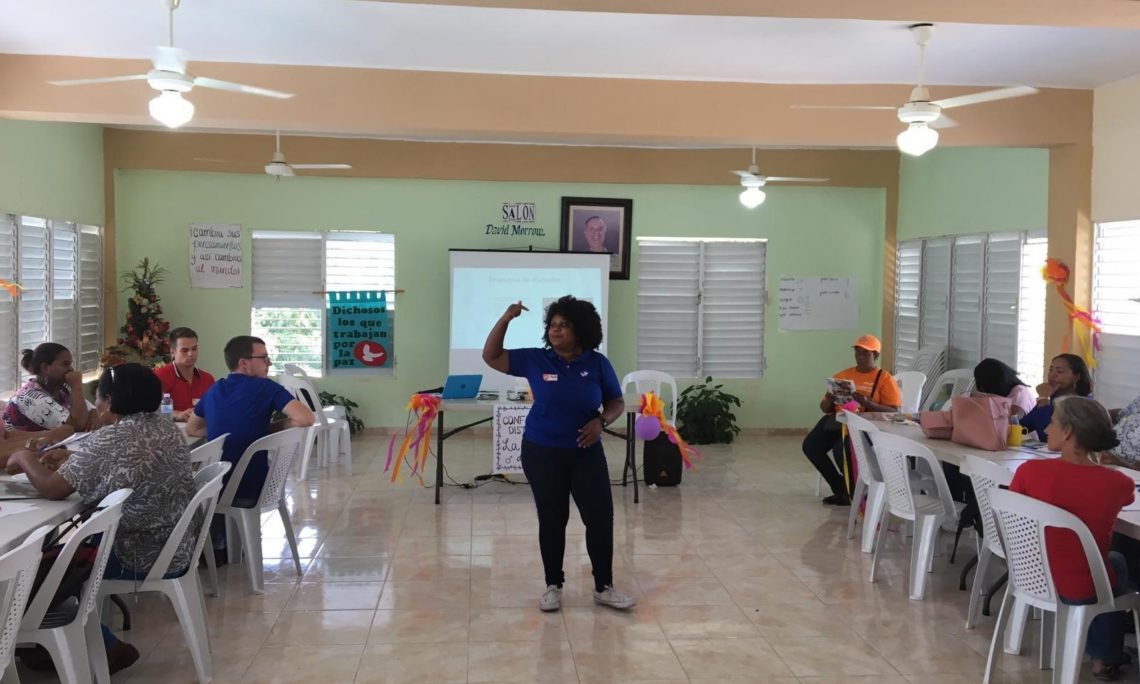 My name is Judith, I am in my 20s, and I was born in The Bronx, New York. I’ve lived in my beloved Bronx all of my life, with the exception of my time here in the Dominican Republic as a Peace Corps Volunteer.

My mom and dad are from the Dominican Republic. My mom actually doesn’t speak much about her journey to the United States and as much as I’d love to ask her more, I’ve realized the importance of honoring the privacy of someone’s personal story, specifically an immigration story. Living in the DR for over two years has peaked my interest and I’ve been able to get a little more info from her: My mom arrived through Puerto Rico in 1986. A year later, she married her childhood friend, my dad and they settled in the Bronx, where they had my sisters and me. Although they separated years later, I’m eternally grateful for the communication respect they’ve had for each other.

My mom raised us alone, in a country where she didn’t know the language well, and didn’t have many friends. Gladly she had settled in The Bronx, where so many other Dominicans lived, so she was able to learn more about life in the states from her community. My sisters and I would spend our summers in Santo Domingo with my grandparents so that my mother could focus on work and save up more money for us and to send back as remittances to family in the DR.

Living in The Bronx, I’ve seen the effects neglected communities can have on a person. When I was fourteen, I knew girls who had experienced unintended pregnancies, trauma, and unhealthy relationships. At fifteen, I decided to become a Teen Advocate for Planned Parenthood of New York City (PPNYC), and I never looked back. I worked there as a Teen Advocate, Teen Advocate Program Assistant, Global Youth Ambassador and Sexuality Educator over the course of eight years.

I’ve seen my neighborhood in the states change in a number of ways. It’s bittersweet feeling to see gentrification change so much in the Bronx, because although there are more services and resources readily available, more privileged demographics are causing lower income families to migrate. I wish the people I wanted to help most were still there to receive the help they were neglected when we were younger.

Regardless, I continued to work with people of higher need. When I was 19, I was chosen to become a Global Youth Ambassador for Planned Parenthood Global (PPG). This honor allowed me to travel to Nicaragua, where I learned how local youth administered birth control pills, Depo-Provera injections, and distributed condoms to other young people through a program called 0-20 (zero pregnancies under the age of 20). They amazed me. I was so motivated to be working with these young people that I decided that sometime after I graduated college, I would travel to the Dominican Republic to learn about my culture and work with youth concerning sexual health. A PPG personnel who worked with the Nicaraguan counterparts told me about Peace Corps, and here we are today.

My Peace Corps service consists of sexuality workshops in the local schools and with my community member. The work require me to be readily available at all times, sometimes using my living room space as a safe place for people to come ask me personal questions. Topics at my workshops include, but are not limited to; body image, self-esteem condom negotiations, contraceptives, and healthy/unhealthy relationships. My work is most rewarding when workshops that start with uncomfortable giggles and insecurities eventually transform into confident attitudes that lead to informed decision making about sexual health. I love seeing young people realize the consequences of risky behavior. It is my job as a volunteer to help them take the steps they need to ensure the future they envision for themselves.

My most significant Peace Corps experience has been facilitating a Pelo Malo No Existe (Bad Hair Does Not Exist) workshop to professors, directors, and social workers of schools during a gender conference. Many of these professionals came in thinking bad hair existed, and that we as descendants of Africans, had to “tame” our hair to look like our Spanish colonizers. For days after the workshop, my fellow volunteers who were part of the conference sent me voice messages telling me about their counterparts defending girl’s rights to attend school with her natural hair, or a professional who started wearing her hair naturally. It reminded me why representation is so important. Here I was, an Afro-Latina who learned to love herself when she started taking Afro-Caribbean courses in college, passing her self-love to the people around her. I was having conversations with professors on how to remind black and brown children that they are beautiful, intelligent and important so that they could have a successful school day. It reassured my belief of work being an extension of love and compassion, and to always leave a person feeling positive about who they are as a person.

Peace Corps in the Dominican Republic has taught me so much about myself. My friends back home always joke about my “passion” of speaking up for social justice, but as I said before, my time here has really taught me to teach from a place of love and compassion. My time in the DR as a volunteer has reminded me that everyone has a story, and it’s up to us to be intentional in being intersectional and inclusive. I’ve learned to love myself in a country where many have been taught to see blackness as ugly and wrong; not to judge when others haven’t embraced their blackness; to take care of myself before I can care for others. Most importantly however,  I’ve learned that those who love you may be far away, but always a part of you through memories you’ve made together.