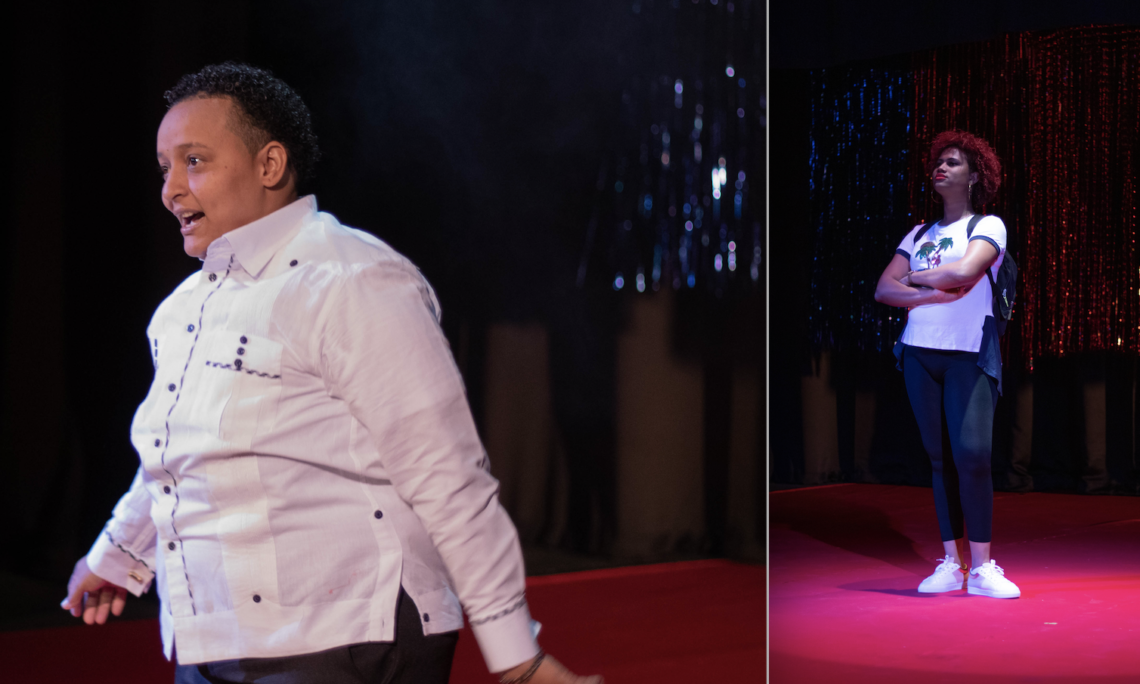 Xander (left) and Eva (right) presenting their monologues on the final presentation of the theatre program for trans people. / UNDP

How two trans people are more empowered to fight for their rights with USAID support.

Xander Figueroa and Eva Morillo, a trans man and woman, have gone through difficult circumstances in their lifetimes. A 34 year-old father and activist for the rights of trans men, Xander says he’s had more positive experiences than negative. Eva, a trans woman activist, entrepreneur and radio host from San Juan de la Maguana, Dominican Republic, has been working with the trans women community to help them with what they need. Unlike Xander, Eva has experienced mostly negative encounters.

According to a 2017 study conducted in the Dominican Republic, 27 percent of the staff of 22 health institutions said they preferred not to provide services to transgender people. Violence against LGBTI persons, particularly trans persons is a growing concern. From 2006 to February 2021, TRANSSA (a local NGO) has documented 49 murders of transgender women, of which only five resulted in the prosecution of suspected perpetrators by Dominican authorities.

Eva says: “I have experienced discrimination and was almost kicked out of school because I dressed like a girl. Trans women sometimes don’t pursue an education for fear that they will be bullied. We mostly engage insex work because society has pushed us to do so,” she says. Xander was bullied and sexually harassed by a neighbor who said that he was going to teach him that he was born a woman.

In order to promote the rights of the LGBTI community and improve the visibility of trans people, USAID’s Being LGBTI in the Caribbean project, implemented by UNDP, has been supporting the community since 2017. This initiative led the development of a theatre program for trans people, in the framework of the United Nations Free and Equal Campaign. This program, led by Isabel Spencer (playwright, artist and black lesbian activist) helped trans people receive the tools to make visible and strengthen the expression of their personal stories related to bullying, violence and discrimination in the social, educational and family spheres. A total of six trans men and 14 trans women completed the training and received their certificates of participation in an event accompanied by representatives of the organizing institutions, and more than 100 attendees. One final event included seven monologues that shared the stories of resistance of Trans women and men, as well as their needs to build an inclusive country.

For Xander, the theater was an immense opportunity to find a shared community. “It was a surprise when I saw the post on social media networks.” He was not going to attend because he was living in Baní at the time (a town in the Southwest of the country that’s one hour away from the city of Santo Domingo). Thankfully, a friend sent him the picture and convinced him he should join. He was selected to attend and started the training. At first it was not all easy. “I was going to leave because transport was difficult because I had to travel back home at night. But every day that I went and said that I was going to leave it, the more I got excited about the workshop, the more I liked it.” Xander was hooked. “It was something that I was never going to forget.”

This program helped trans people receive the tools to make visible and strengthen the expression of their personal stories related to bullying, violence and discrimination. / UNDP

For Eva, “It was an experience that I loved because I learned to find myself, to love myself. It was my second play. I still had a bit of stage fright, we were all nervous, but when we stood on that stage the fear left us. I learned many things about theater after doing that workshop; I even presented another play, I made music videos, I made a short film. It opened doors and I thank it immensely.”

The training also served as a merging point for trans men and women. “I believe that never in history has there been such a close relationship between trans women and trans men as there was (in the workshop). I always said that at some point we have to unite, because it is the same fight; we seek the same thing. If we seek the same, then we have to get together. The trick is in the union. Today I have many trans women and men friends,” says Xander.

Sharing trans stories and making them visible was key to empower the participants. For Eva, “Visibility means for me to show the world that I have the same rights as any heterosexual person, as any woman; that there are laws that defend trans women, that there are allies, communities and organizations that exist, so that tomorrow nobody can trample over them and humiliate them.”

USAID in partnership with UNDP has supported 88 Civil Society Organizations who have engaged in advocacy interventions, trained and supported 141 human rights organizations and 1,484 human rights defenders. The project has done 6 public forums in which national governments and LGBTI civil society interact, produced 3 research papers on LGBTI subjects and helped include LGBTI human rights on the Dominican National Youth Plan, the Judiciary Strategic plan and the Dominican National Plan for gender equality and equity.