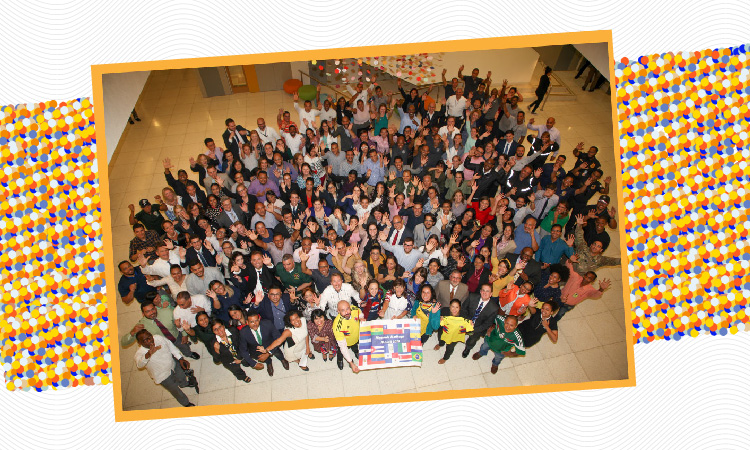 Hispanic Heritage Month (Sept. 15 – Oct. 15) honors the many contributions Hispanic Americans have made and continue to make to the United States of America. Dominicans are the fifth largest population group in the United States.

Amín Guevarra-Fernández, He was born in Salcedo, R.D. and raised in the Bronx, N.Y. He graduated from Columbia College in 2011 and New York Law School In 2019.  Amín is currently an Immigration Law Graduate at The Bronx Defenders and has experience in representing asylum seekers in the U.S. Amín is also a spoken word poet.

“Growing up I was often called a ‘Dominican York,’ struggling to be accepted as an authentic ‘Dominican’ yet contending with assimilating to the U.S. culture. Today, I don’t run from this identity instead I embrace it. The fact is that I have the privilege of having two countries I can call home. And I won’t let anyone make me feel ashamed of it.”

Diana. The youngest daughter of Dominican parents that immigrated to the United States from Santiago, DR. She grew up in the Bronx, New York, where her family instilled in her a strong work ethic and large dose of Dominican pride. She went on to earn a Bachelor of Arts in Art History and International Relations from Tufts University, where she received a Fulbright grant to Argentina, and a Master of International Affairs from Columbia University.

Diana is currently Senior Director of Economic Empowerment at the Hispanic Federation where she leads HF’s strategic, programmatic and advocacy efforts that seek to increase the financial security of Latino families.  Prior to joining the Hispanic Federation, Diana served as the founding Program Director at the Northern Manhattan Arts Alliance, working with the arts community in ‘El Alto Manhattan’, and has worked with a variety of community development nonprofits in New York City.

“It is important for me to honor my Dominican roots in everything I do. I work to represent my people daily and to serve others through the values my Dominican family instilled in me. Those values include dedication, perseverance, self-worth, service, and a joy that comes from within. I am grateful for the opportunities afforded to me because of my parents bravery to leave their homeland and start anew, but also for the connection to the island that has contributed to the person I am today.” says Diana

Michael Barrientos, a licensed Professional Engineer at Engineered Devices Corporation where he has worked on various projects in the tri-state area, including the Freedom Tower, Hudson Yards, and 56 Leonard Street. He is currently working on skyscrapers that will reshape the New York City skyline. His madre era del Ensanche Bolivar, Santiago y el padre es de Cañada Bonita.

In his free time, Michael loves tinkering with technology and taught himself to code in Python. Following this interest, Michael became impassioned about new technologies, such as blockchain and in 2018 he co-authored and published his first book “Gold Rush 2.0: Decrypting Crypto” which aims to simplify blockchain and cryptoassets, such as Bitcoin, for readers. In this pursuit, Michael aims to share his passion for technology and empower others with a greater understanding of the technologies that are transforming our world today.

“I’ve always been proud to be Dominican. My parents taught me that we are happy people and that while “Típico” music is playing the energy will never end. I also learned that no adversity that comes our way can bring us down, much less can take away our joy. In college I was the deejay for Latino events, and I proudly used the name DJ Plátano. All my parties ended with the song “Yo Voy Pa’ Lante” by El Secreto ft. Poeta Callejero because the song has the powerful message that to get where you want, you have to fight and go through many sacrifices”, says Michael.

Elizabeth Acevedo, is a New York Times bestselling author of The Poet X and With the Fire on High.  The Poet X tells the story of Xiomara, a quiet Dominican girl who joins her school’s slam poetry club.  The Poet X, won the 2018 National Book Award for Young People’s Literature.  She is also the recipient of the Printz Award for Excellence in Young Adult Fiction, the CILIP Carnegie Medal, and the Boston Globe-Hornbook Award.  Additionally, she was honored with the 2019 Pure Belpré Author Award for celebrating, affirming, and portraying Latinx culture and experience.  Elizabeth’s mother is from Bonao and her father is from Cristo Rey in Santo Domingo.  She was born and raised in New York City.

“It is important to me to both celebrate and examine my Dominican identity in my writing; to uplift my community through my work and also encourage us all to practice empathy and demand social justice,” Elizabeth said.

Wendy Lopez, is a registered Dietitian and co-founder of Food Heaven (@foodheaven), an online platform that provides resources on healthy, balanced life living.  Wendy is passionate about accessible and culturally relevant nutrition education. She is the co-author the 28-Day Plant-Powered Health Reboot, the co-host of the Food Heaven Podcast, and the co-founder of Food Heaven. Her family in the DR is from Rancho Viejo, La Vega and Imbert, Puerto Plata.

“When I think about what it means to be Dominican, I think about the warmth and kindness of our people. Our ability to use innovation and creativity to make something out of nothing. I’m inspired by the strength and resilience of my ancestors, who worked hard to preserve our culture and traditions.” Wendy said.

Hailing from the Dominican Republic, Gadiel Del Orbe grew up in Harlem, NY. A Naval Veteran who served 4.5 years onboard the USS Ronald Reagan, he started producing videos for Being Latino and became one of their top producers. He has been a producing videos for BuzzFeed’s Pero Like (@perolike) for 3 years, he has a passion for comedy and creating Latinx content. Gadiel currently resides in Los Angeles.

Gadiel’s family is from El Pozo De Nagua and he said “My mission is to share my Dominican heritage with the world!”.

Hiram Arnaud, born in New York, NY and raised in New Jersey.  Hiram works as an Assistant General Counsel for the Major League Baseball Players Association, the union that represents professional baseball players on the 40-man rosters of the 30 Major League Baseball teams.  He is a graduate of Fordham University and Cornell Law School.  Hiram’s father was born and raised in Santo Domingo.

“It gives me great pride to be of Dominican heritage and to be part of the thriving Dominican community in New York City.  Hispanic Heritage Month is a yearly reminder that the steps us young Dominican-American professionals take today are only possible due to the hard work and perseverance of other Latinos — including thousands of Dominicans — who, without knowing the language or culture, left both their homes and hearts in their homelands to contribute to the American melting pot.  The United States is what it is today because of the countless contributions of our people, and I am always mindful of their sacrifices.  I thank God for the honor of sharing such a rich and beautiful culture with humble and hardworking people, who leave the world a better place than how they found it.” said Hiram.

Jerelyn Rodríguez, co-founded The Knowledge House in 2014, a nonprofit organization that provides a career pathway for those who had either dropped out of college or had never had the opportunity to attend by teaching young people the latest technology skills in computer programming, digital design and workplace aptitude.  In 2016, she was honored as Forbes’ 30 Under 30 in Education. Jerelyn has 10+ years working in politics, the youth workforce development field and education. Jerelyn has a degree in film studies from Columbia University.  Her family is from mom is from Puerto Plata and her dad is from Los Minas in Santo Domingo

“I love being Dominican! Our people are so diverse and our food is so delicious. Our island is gorgeous. I feel most at peace when I’m in my  patio in Santo Domingo. As a first generation American, I love teaching people in the US about my history and my parents’ story. I also feel a responsibility to educate the world on what it means to grow up in the US as an Afro-Latina and daughter of immigrants, and the challenges that come with that,” Jerelyn said.

Kelvin Grullón, is a Dominican American actor from Washington Heights, New York City.  His Father is from Nagua and his mother from San Francisco de Macorís.  A graduate from the University of Virginia (2013), he launched his theater career with the one-man play The Brief Wondrous Life of Oscar Wao, a show in which he plays 10+ characters from Junot Diaz’s Pulitzer Prize winning novel.  His more recent works include the leading role of Miguel in the feature length film Ivanna en Elias Pina, and his series regular role as Chuchi on the YouTube web-series DominicanYork.  He is a multi-talented artist with a passion for storytelling, often working as a filmmaker, producer, spoken word performer, and visual artist.

“Pursuing an acting career is no easy task, but as a Dominican man of Brown skin living in America I know the importance of representation in all our stories; and that makes the pursuit both necessary and worthwhile,” Kelvin said.

Eileen Fuentes,with only just 34 years old, Eileen was diagnosed with a very aggressive form of breast cancer. Having cancer at such a young age had a profound impact on her and laid the groundwork for understanding the healing power of her ancestral food and the important role of family and community. Eileen has become a fierce advocate for all women with breast cancer, with a particular focus on the most vulnerable.

She founded and led the first bilingual wellness program in collaboration with the Herbert Irving Cancer Center at Columbia University Medical Center where she now works full-time.  She is a graduate student at Teachers College at Columbia University where she is pursing a degree in Health Education. She is a proud resident of Washington Heights, where she was born, raised and works. Her family hails from Santo Domingo and Santiago.

“Being a Dominican woman is my superpower. Not only am I the descendant of very strong Dominican women, I am also the mother to 3 incredible Dominican girls. It is why I am dedicated to use what happened to me to support the women in my community and beyond.

Jasminne Méndez, is a poet, educator, mother, community organizer and award winning author.  Jasminne is the author of two poetry/prose collections Island of Dreams which won an International Latino Book Award, and Night-Blooming Jasmin(n)e: Personal Essays and Poetry.  She is an MFA graduate of the creative writing program at the Rainier Writer’s Workshop at Pacific Lutheran University.  Her family is from Santo Domingo and she loves cupcakes, plátanos (in all forms), yoga, mangoes, her husband Lupe’s tostadas, her Mami’s sancocho, and swimming in the ocean.

“Being a Dominican in Texas isn’t easy. Most people don’t know how I got here or what to do with me – a black woman who speaks fluent Spanish and dances merengue. I call myself a purple unicorn here. But I use my position in the community as a writer and activist to raise awareness about Dominican identity, history, and social issues so that maybe one day being an habichuelas eating, bachata loving Dominican in Texas won’t seem so foreign anymore.” said Jasminne.