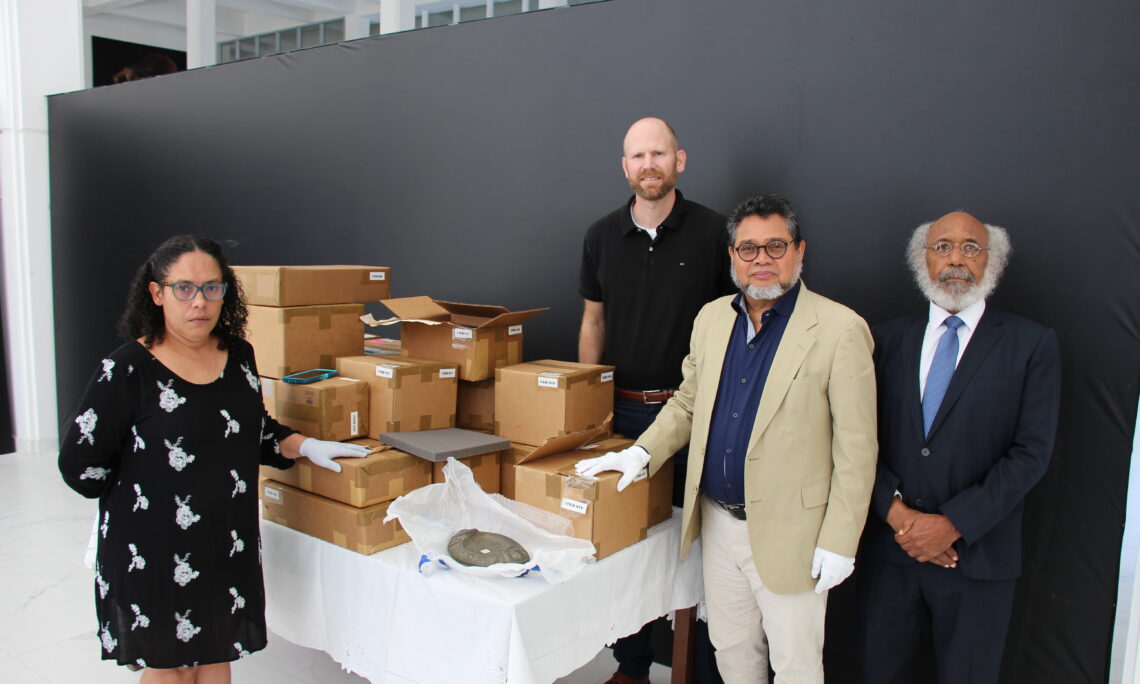 Santo Domingo, D.N.- The Chargé d’Affaires of the United States Embassy, Robert W. Thomas, together with the Minister of Culture, Milagros Germán, led a ceremony to repatriate Taino artifacts from the United States Government to the Dominican Government, with the presence of the deputy director of the International Operations Division of the Federal Bureau of Investigation (FBI), Raymond P. Duda.

The official presentation and delivery of the 21 pre-Columbian artifacts includes articles for agricultural, religious, domestic and ornamental use in various materials, such as ceramics and stone. The delivery was made at the Museo del Hombre where Mr. Manuel Vargas Payano, director of the Museum, Mr. Carlos Andujar, general director of Museums of the Ministry of Culture, researcher Orli Pena, museum specialist Maria Belisa Ramirez and Lisa Álvarez from international relations of the Ministry of Culture. The delivery was made with an inventory and technical reference sheet of each one of the pieces, which will be classified and studied as part of the expertise process.

Chargé d’Affaires Thomas assured that “cultural property is a unique, non-renewable resource that is important  for learning about the diversity of human history and cultures. The  protection of this cultural patrimony all over the world, and the stories it  tells, is a priority for the United States. We are committed to combating the theft and trafficking of cultural heritage, and to preserving and  protecting it.” He also noted that this collection of cultural property was part of the Federal Bureau of Investigation (FBI) Miller Case and constitutes the largest single recovery of cultural property in FBI history. Additionally, the investigation and subsequent discovery to culminate in the repatriation, ratifies the fight against the illicit trafficking of pieces of cultural heritage and the need to sign an agreement that establishes a protocol between the two countries.

Assistant Director of the International Operations Division of the Federal Bureau of Investigation Raymond P. Duda, stated that “This case, the efforts to identify and return these items, and the attendance of individuals from so many different organizations today highlight the importance of international cooperation. The success we share today is a testament to the long-standing partnership between the FBI and the Dominican Republic.  Without these strong ties and the ability to work together on matters of importance, we would not be able to achieve these remarkable results.”

About the Miller Case

In 2014, FBI agents found in rural Indiana about 42,000 items, half of which were Native American and the other half were from countries around the world. The items included pre-Columbian pottery, an Italian mosaic and, shockingly, enough human remains that would make around 500 people. The bones mostly came from ancient Native American burial sites.

This collection had been amassed by Don Miller, a scientist who helped build the first atomic bomb, and a globetrotting amateur archaeologist whose passion for collecting sometimes crossed the line into illegality and outright looting.

In a six-day operation, the FBI took more than 7,000 of the artifacts that it found to violate state, federal and international treaties.

To accomplish identification of the cultural artifacts, the FBI partnered with tribal authorities and academic experts, consulting with archaeologists, anthropologists, and tribal experts on how to handle and care for the objects and human remains, and how best to locate their rightful owners.

In addition, the FBI repatriated 361 Chinese cultural artifacts to China and 450 cultural and historical artifacts to the Republic of Haiti, marking the two largest repatriations of art from the United State to foreign countries.