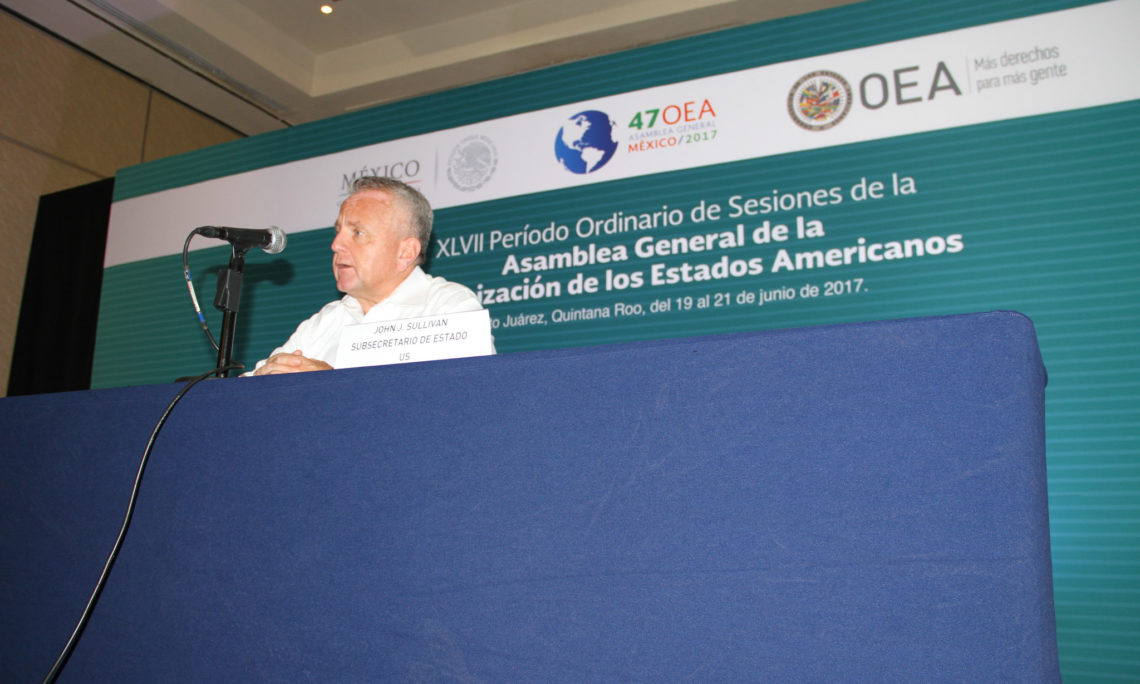 At a Solo Press Availability

MODERATOR: (Via interpreter) Good afternoon. Welcome to this press conference of the Under* Secretary of State John Sullivan. He will start with a brief declaration and then he will answer some questions. I will assign the persons that will be allowed to ask the questions. Please use your mikes.

DEPUTY SECRETARY SULLIVAN: Well, thank you very much, everyone, for being here. I’m delighted to see everyone. Good afternoon. Again, my – I’m John Sullivan, Deputy Secretary of State. I want to start by thanking President Pena Nieto and Foreign Secretary Videgaray and the people of Mexico for hosting this year’s OAS General Assembly. I also want to thank Secretary General Almagro for his bold leadership of the OAS and thank him and his team for organizing this general assembly.

The Trump administration recognizes the enormous importance of our neighbors in the Americas in building long-term prosperity for the United States. Our partnerships in the Western Hemisphere are vital to our economic competitiveness and essential to our ability to solve transnational challenges and ensure stability in the region. The Trump administration is committed to working with our partners in the Americas to defeat transnational criminal organizations, keep our countries free of drugs, and end the violence, illegal arms sales, and human trafficking that are lethal byproducts of the drug trade. We know in the United States we have our own work to do in reducing demand, but we call for countries in the Western Hemisphere to quickly put new pressure on drug cartels and undertake new commitments to defeating them.

Lasting prosperity and collective security also require effective democratic institutions that deliver results for their people, provide economic and social opportunity, and safeguard citizens’ security. OAS member-nations are fostering increasingly greater agreement, helping Venezuela find a peaceful, democratic, and comprehensive solution to its current problems and holding their government to account for its abuses. We all have been alarmed by the dramatic deterioration of democratic rule in Venezuela and by the violence and breakdown of civil norms that have accompanied it. On behalf of the United States, we say to the Venezuelan people that your cause is not forgotten. We stand with you in your aspirations of recovering a society that guarantees civil rights and political expression.

The Government of Venezuela must understand that attempts to silence its citizens’ voices will not stop others around the world from speaking up for them. The United States joins its partners in the OAS in urging the Venezuelan Government to fulfill its commitments under the OAS Charter. These commitments include holding free elections, respecting the independence of the national assembly, releasing all of Venezuela’s political prisoners, and directly addressing the humanitarian needs of the Venezuelan people. In keeping with the spirit of the Inter-American Democratic Charter, our goal remains a return to the full respect for the rule of law and the full respect for freedoms of political expression and participations in Venezuela.

We encourage all OAS nations that are committed to upholding these values in their own countries to join the United States in holding the Government of Venezuela accountable. The level of agreement between OAS partners to confront the situation in Venezuela is a win for democratic values, and we hope to maintain this level of unity as we work to solve shared security challenges and obtain prosperity for all of our citizens.

Thank you. I’d be happy to take questions.