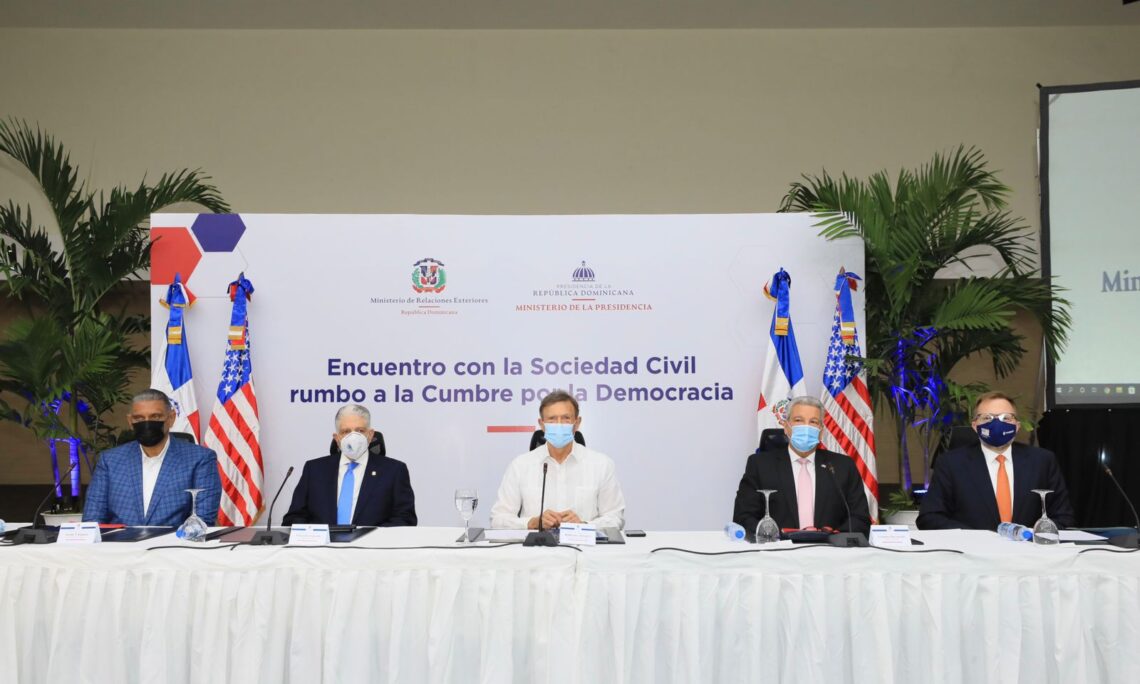 Good morning distinguished ministers and legislators, representatives of Dominican Civil Society and the Private Sector! It is an honor to participate in this event, which is dedicated to such a vital and urgent goal: strengthening democratic institutions.

We live in a concerning time of backsliding by many governments around the world – a troubling reversion toward authoritarianism and a growing disregard for human rights. The crisis of the global pandemic has also stoked skepticism that democracy can deliver positive results when it matters the most. Last year, 70 percent of Latin Americans were dissatisfied with the way democracy works – up from approximately 50 percent in 2013.

Recognizing the urgency of this global challenge, President Biden has placed democratic renewal and respect for human rights at the center of his focus, and he knows that the United States cannot do this alone. We need the cooperation and commitment of like-minded democratic partners. To this end, President Biden will host a global Summit for Democracy on December 9-10 in order to coordinate global efforts at democratic renewal.

The Summit for Democracy has three core pillars or themes: defending democracy against authoritarianism, fighting corruption, and promoting respect for human rights. The Summit will bring voices from governments, civil society, the philanthropic community, and the private sector, representing countries from every part of the world.

The United States approaches this Summit with a sense of humility, recognizing that every democracy, including our own, is a work in progress. We are demanding as much from ourselves as we are from other Summit participants given the urgent need to renew democratic institutions and protections in the United States. In consultation with civil society and the private sector, the United States will announce ambitious commitments to strengthen our own democracy and respect for human rights, and also marshal an international coalition to defend the quality, integrity, and resilience of democracies around the world.

It was my honor to convey President Biden’s personal invitation to President Abinader to participate in the Summit for Democracy. We envision an important role for the Dominican Republic at the Summit, given your role as a positive example of progress in the region.

Since taking office in August 2020, President Abinader has made bold commitments and promising steps towards delivering on his promises to the Dominican people to fight corruption and increase transparency.  Over the last year, Dominican authorities have investigated corruption and arrested individuals involved in fraud and manipulation, including those senior officials previously seen as untouchable as well as legislators involved in drug trafficking, including some within his own political party.

President Abinader appointed many qualified, competent professionals to run independent oversight agencies.  His government has worked with the United States to formulate and propose far-reaching institutional reforms to fight entrenched corruption and make the government more accountable. In recognition of these steps, USAID recently pledged an additional $1 million of U.S. support to strengthen government systems and oversight – the first such investment the new USAID anti-corruption fund has ever made.

We made this investment to aid and assist the government in implementing these critical reforms, because if those reforms can be enacted and implemented successfully, and if the government’s commitment to end impunity and successfully investigate and prosecute cases of corruption and narco-corruption can be fulfilled, then the Dominican Republic stands poised not to simply uphold the desires of its citizens for transparent and honest government – but to surge ahead as the region’s leader and exemplar of democracy, justice, transparency, and a strong, stable economy.

Democracies are governed by citizens’ representatives. They are built on dialogue, learning, openness, and tolerance within society. This event highlights the Dominican government’s recognition of that and extends a hand to non-governmental organizations and the private sector, youth, human rights groups, religious groups, members of the media and other groups as it seeks your input.

I commend the diverse group of you who have gathered today for your willingness to engage and contribute your expertise and energy to fortify your country’s commitments. Democratic government cannot function without the input and accountability provided by civil society. Civil society plays an indispensable role, supporting the government’s efforts to implement these commitments efficiently and fairly for the benefit of the Dominican people.

The diversity and vitality of the civil society groups here today and the many others in this country that the U.S. government has been proud to partner with over the years show that the hard work of building democracy can succeed. It took commitment from leaders who came before us to make these things happen. The Summit for Democracy is our chance, at this challenging time in history, to make our own contribution to protecting the progress that we have made together.

That is why today’s event and its spirit of democratic participation give me great hope for the future. Thank you for being part of this effort, for rising to the occasion. I encourage you all to engage and participate in the various events and sessions for the upcoming Summit for Democracy, and I look forward to continuing to work with you all in the months and years to come