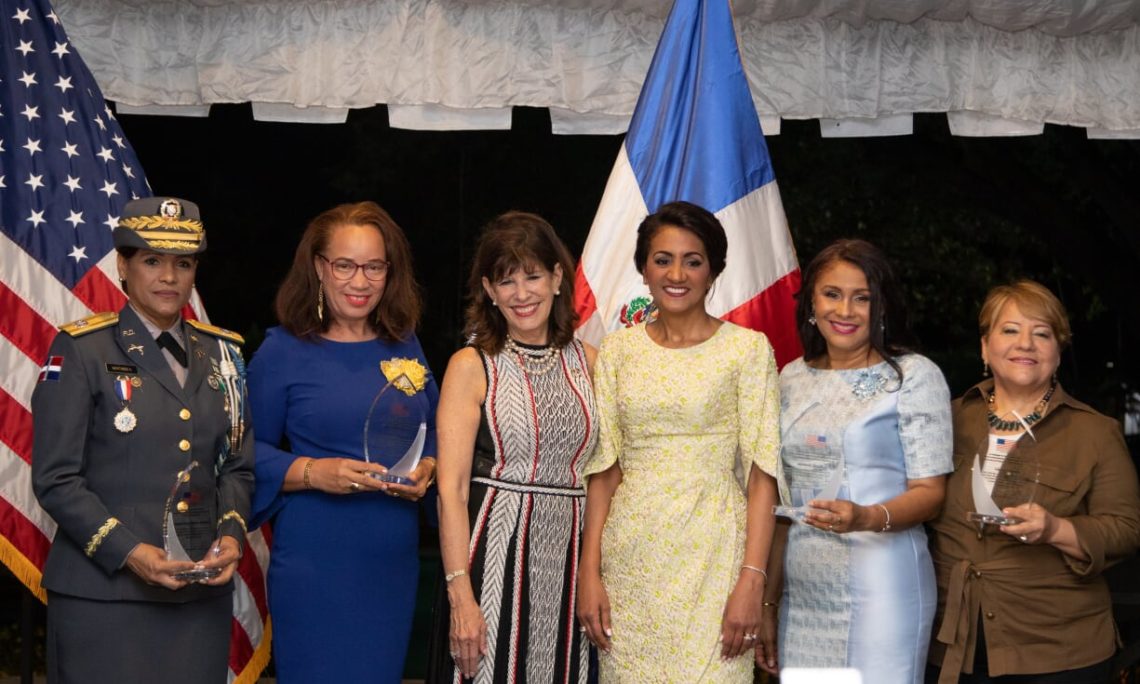 Today we celebrate the countless women whose courage and resolve have contributed to the character and development of the Dominican Republic.  The equal opportunity of women in every facet of daily life is an essential feature of a free and prosperous society.  That is why I am dedicated to ensuring that my four priorities – security; investment and trade; disaster preparedness and education or what I like to call SIDE – include making sure we are uplifting and highlighting the role of women.  SIDE-by-SIDE we can make a difference.

Today, I have chosen four women that represent each one of those priorities.  These notable women have fought for equality and against the status quo.  Just like my dear friend Soraya Checo, honored last year for her efforts in improving education who is here with us tonight, these women are creating a legacy that continues to inspire generations of women to live with confidence, to have a positive impact on their communities, and to improve the Dominican Republic every single day.

Investment and trade is also one of my priorities.  The United States is the number one trading partner with the Dominican Republic and I know that foreign direct investment is essential to the D.R.’s growth.  That is why during my first six months, we have opened the doors back up for the Overseas Private Investment Corporation (OPIC) to support projects in the Dominican Republic.  Included in this, is the OPIC 2X initiative, which will directly invest $350 million and mobilize over $1 billion in capital worldwide to support women-owned, women-led enterprises and companies that provide a product or service that intentionally empowers women.

That is why today, our second notable women comes from the area of investment and trade and is Paola Santana – Founder and CEO of Social Glass.  Social Glass is a software ecosystem that uses artificial intelligence to power high-performing governments.  Her work has spanned numerous Dominican government agencies as she has worked to develop public infrastructure projects and strategic partnerships integrating exponential technologies.  Her work is indicative of how young women can excel in technology and create private sector solutions for the public sector.  Although unfortunately she could not be here today because she is in Silicon Valley –highlighting again the people to people relationships we have between the U.S. and the D.R. – she is represented here today by her mother.  Thank you mom for being here – a round of applause! I know how hard a mother’s work to create a path for their children to excel is.  That is why I would like to recognize my daughter Juju, who has been here from the beginning supporting me.  I hope I can serve as a role model for her and other girls to show that if they can dream big, they can do whatever they set their mind to.  A round of applause for Paola Santana and her mother, please!

Disaster preparedness is my third priority because being from Florida I know how essential it is for our future.  This year, I would like to recognize a woman that is ensuring that the Dominican Republic is fully prepared with accurate information for any disaster.  I have chosen Gloria Ceballos, the Director of the Dominican Republic’s National Meteorological Office (ONAMET).  She is the first female director of ONAMET.  During 2017’s hurricane season, Gloria and her team were able to support the national early warning system and the Center of Emergency Operations (COE) in emitting alerts to vulnerable communities in the Northern region of the country.  In doing so, vulnerable populations were prepared and evacuated on time, preventing devastating consequences from the impacts of the category 5 hurricanes Irma and Maria.  She has worked with the U.S. government on a number of projects, particularly receiving technical training from several USAID programs.  Let’s all give Gloria a hand for her leadership and innovation!

Last but not least, I want to focus on education.  I want to highlight a woman who traveled far to get here today – all the way from Dajabón.  Rosa Pacheco is the principal of Escuela Francisco Javier Ureña Canela in an underserved neighborhood of Dajabon.  She works directly with Peace Corps Volunteers to improve children’s literacy and protect the environment.  Rosa has worked over 22 years in some of the poorest communities in the region.  She not only reaches the hearts of her students but of the families.  She goes above and beyond by providing teacher trainings and creating programs that focus on the environment.  Thank you Rosa for your contribution.  I hope to visit you in Dajabon soon!  A round of applause for Rosa, please!

The United States will continue to advocate for women.  I was honored that last month Vice-President Margarita Cedeño, along with several female ministers and female Ambassadors got together with me to have a conversation on how we can work together on important issues.  I am also happy to announce the upcoming launch of our State Department Initiative, the Academy of Women Entrepreneurs (AWE).  We will be selecting 30 young Dominican women– between the ages of 18-35 – to take part in a new training, mentoring, and networking program.  The goal is to help young women entrepreneurs accelerate and grow their business projects.  The Dominican Republic will be a pilot country for this new global program.  We will be calling for applications later this spring so please watch our social media accounts and website for the announcement.   Follow us Instagram at Embajada USA en RD and Embajada USA Santo Domingo on Facebook.  I encourage you to apply, or share the information with a young woman you know who would be interested.

Promoting women’s economic empowerment abroad is a top priority for the Trump Administration.  Economic empowerment for women enables developing countries to increase their global financial stability.  That is why President Trump signed a National Security Presidential Memorandum to launch the Women’s Global Development and Prosperity Initiative (W-GDP).  The W-GDP Initiative aims to benefit 50 million women across the developing world by 2025.