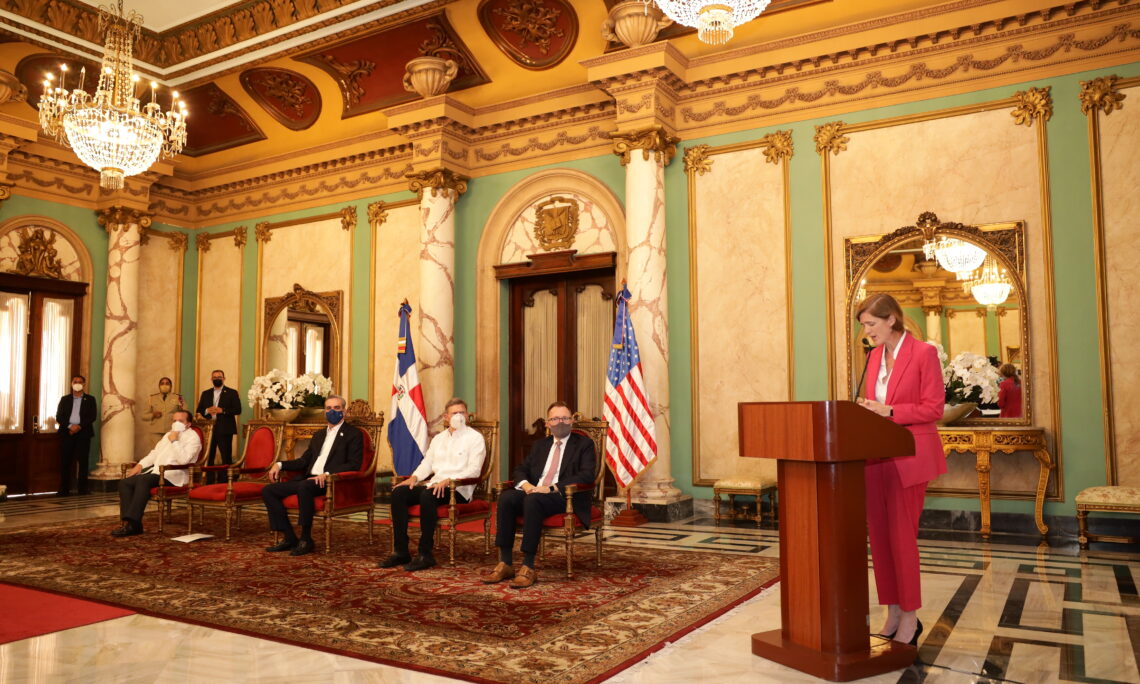 Administrator Samantha Power’s Remarks at the

ADMINISTRATOR POWER: Good afternoon, everyone. It is such a pleasure to be with President Abinader, and to join you, Chargé Thomas, Mr. Alvarez, and all of the assembled leaders, ministers, and embassy staff here today for an event that truly could not inspire more enthusiasm from the United States of America.

I have been a frequent visitor to the Dominican Republic during the last two decades. My 12-year-old son actually plays baseball every February here in Consuelo, in San Pedro. He could not join me today, but I did get him an autograph from Rufo, so, at least I am not returning to the United States empty handed.

While my son may be way more excited about Dominican baseball, I am thrilled about the direction of Dominican democracy. When my son heard that I might have the chance to speak with Vladimir Guerrero, he was ecstatic. When I heard I could discuss institutional reforms with President Abinader, I leaped at that chance.

Institutional reform may not be the kind of mass appeal topic that makes headlines or that glues people to their TVs, like baseball. But there may also be no more important topic to the future of the Dominican Republic.

Now, for 20 years, the Dominican Republic has been one of the fastest growing economies in the Western hemisphere. Its inspiring growth and booming industry attracted nearly half of all the investment in the Caribbean before the COVID-19 pandemic. But in 2020, its citizens demanded change, a more accountable government and real progress in the fight against corruption. And that led to the first peaceful transfer of power from one party to another in 16 years.

Since taking office, the President has taken steps to strengthen the rule of law, and to show that democracies can deliver for their people.

I want to stress one thing, that may not be as obvious if you live here, in this country: President

Abinader is doing this, taking these reformists steps, at a time when other governments in the region, and all around the world, are actually moving away from the rule of law, finding laws and institutional constraints inconvenient. Practicing what is now called democratic backsliding.

In April, during the last High-Level Dialogue, the United States agreed to work with the Dominican Republic on shared goals that I just had the chance to talk to the President and Minister Alvarez about. Shared goals like police reform, anti-corruption, and advancing transparency, human rights, and anti-discrimination. Like our partners here in the Dominican Republic, we recognize that corruption not only undercuts democratic processes, it slows economic growth, it actually scares away private investment. And that is why President Biden has actually made fighting corruption a priority of the United States. He is the first American President to make corruption a national security priority.

Since the High-Level Dialogue meeting in April, we have seen meaningful efforts to turn words into action here in the Dominican Republic.

And today, we take the next step in supporting this Administration’s historic commitment—and the demands of the Dominican people—to prioritize that fight against corruption, and a whole set of other reforms.

As you have stated, Mr. President, no one is above the law. We support your efforts to investigate corruption no matter where the evidence leads.

After a wide-ranging investigation that included assistance from the United States, President Abinader’s Administration launched Operation Falcon. An offensive against drug trafficking and money laundering, that made clear once again a commitment to addressing crime and corruption no matter where investigations lead—even when members of Congress are implicated.

Justice is critical. It is necessary. And the United States is committed to partnering with the Dominican Republic’s government to show that crime does not pay. For example, we are now helping assist the Dominican Republic to create a system of civil asset forfeiture, so the state can recover stolen assets and place them back in the hands of the people, where they belong.

But while these steps are a very public version of anti-corruption, there are other, less visible, less obvious reforms needed that don’t get the same attention as a high-profile prosecution or photos of seized cash, stacks of cash on a table, but these other reforms matter just as much.

I’m talking about reforming the country’s procurement process, so that government contracts don’t get handed out to businesses paying bribes or offering kickbacks, while skimming off the top of public resources. Here too, the U.S. has partnered with the Abinader Administration to advise in the drafting of a new Public Procurement Law which will help limit backroom deals.

I’m also talking about police reform, so that marginalized populations are not taken advantage of and that citizens don’t have to pay officials a bribe just to seek help or to stay out of jail, for a trumped up, made up charge. In 2019, the last time a survey was conducted, 47 percent—nearly half—of all people here, who had contact with police said they had to pay a bribe, nearly half.

We are working with the government, as well as civil society and the private sector, to strengthen

police practice and create a process of accreditation, so that the Dominican Republic can hold its officers accountable, according to international standards. I won’t pretend like this kind of reform will be simple or quick. We just spoke about the complexity, and the depth, and the scope of the challenge. We know first hand in the United States, that issues of police violence and impunity can be pervasive, and progress definitely does not come easily; entrenched institutions can be resistant to change. But here in the Dominican Republic, as in the United States, it is a campaign that must be waged.

And finally, I’m talking about watchdogs—independent organizations that are empowered to investigate illegal actions by government officials. Without these independent oversight bodies, institutions inevitably get weakened, corruption runs rampant, often behind the scenes, and steps to address fraud, waste, and abuse get watered down.

The Agency I am privileged to run, USAID, has its own independent watchdog office, its called the Office of Inspector General. And without question, its work has made my agency, USAID, a stronger, more efficient, better run Agency, that is more accountable to the American people. We, here, have worked in partnership with you to strengthen the Camara de Cuentas, and pledged our continued support for independent watchdog agencies, of a variety of kinds, here in the Dominican Republic.

In fact, I’m happy, Mr. President, to announce today that USAID is making available, $7.9 million in new assistance to support the reform of government oversight bodies, strengthen the transparency of the public procurement process and the energy sector, and advance the implementation of the Government’s new National Citizen Security Strategy. Three key priorities for this administration.

At USAID, we have also recently launched, at headquarters, back in Washington, an Anti-Corruption Response Fund, and this is designed so that when countries are taking encouraging steps toward fighting corruption, we can leap into action to support them.

Well, this Administration, here in the Dominican Republic is taking those steps. So, we are acting to fund a $1 million pilot program, working alongside our colleagues at the Departments of State, Justice, Defense, Commerce, and Treasury to support local efforts here to improve transparency and accountability and fight public theft. This is the first such investment this new anti-corruption fund has ever made—that is how encouraged we are about the Dominican Republic’s progress.

All of that said, we know one truth above all others, which is that the future of the Dominican Republic depends on the Dominican people.

They, in the recent elections, not that long ago, chose to elect someone to fight corruption and to strengthen the rule of law.

And it is to them, those people, those voters, that government officials are accountable. The people voted for change, we at USAID, we in the United States, in the Biden Administration, we will do all we can to support reformers who are working to ensure that they get that change — whether through visible acts like prosecutions, or less public reforms of institutions, that may take time.

Every democracy, without exception, on planet earth, is a work in progress. If we want to build democracies that deliver for our people, there is no more urgent fight than this. Thank you so much.

Stay connected with the USAID Office of Press Relations: press@usaid.gov