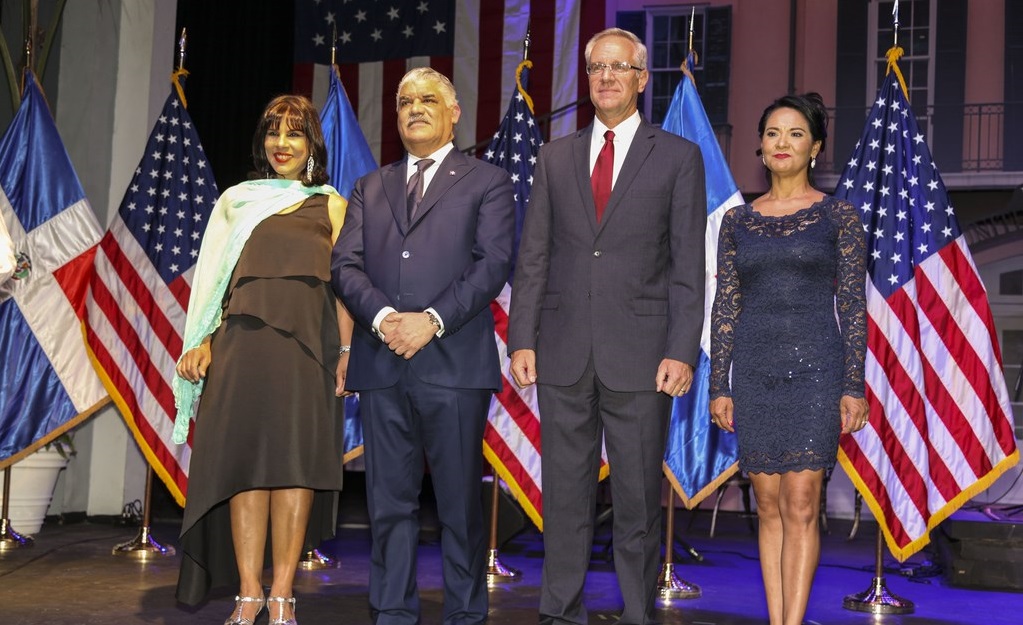 Santo Domingo, D.N. – The U.S. Embassy in Santo Domingo celebrated the 242nd anniversary of the United States’ Independence, in a reception headed by Chargé d’Affaires, a.i. Robert Copley and his wife Yanira Copley.

The event began with the presentation of the flags by the Color Guard of the U.S. Embassy Marine Corps, followed by the national anthems of both countries. The United States anthem was sung by embassy officer Jack Bisase, while a a member of the Dominican Conservatory of Music, Persio Domínguez  performed the Dominican anthem.

In his welcome remarks, Chargé Copley thanked the guests for their attendance, and said, “With each passing day, I cannot help but feel more and more impressed by the strong ties that exist between our countries…the multiple connections that unite us are the backbone of our bilateral relationship. This deep connection manifests itself in multiple ways.”

This year, the celebration was set in the style of the city of New Orleans, the birthplace of several musical genres in the United States, including jazz.

The La Fiesta Theater of the Jaragua Hotel came alive with lights and colorful facades of historic places in the city of New Orleans such as Bourbon Street, Frenchmen Street, among others. The Embassy presented American saxophonist Zack Varner accompanied by his quartet, as well as the Dominican band Tropical Brass, made up of graduates of the Conservatory of Music. Tropical Brass performed Dixieland music, a style of jazz from the beginning of the century.

The guests tasted snacks inspired by Cajun cuisine, native of the State of Louisiana, based on spices and seafood. At the end of the night, the guests enjoyed the traditional fireworks display with jazz background music.

About the United States Independence Day

July 4, 1776 marks the date on which the founding fathers signed the Declaration of Independence. Since then, the date is commemorated as the Independence Day of the United States. Every year Americans enjoy fireworks, concerts and other festive activities. This date symbolizes the progress and constant change in American culture. The Erie Canal, the Washington Monument, the railroads of Baltimore and Ohio (the first public works built in the country) are all constructions that began on a 4 of July.

About Zack Varner and the Band

Dr. Zack Varner is a native of Atlanta, Georgia. He has extensive experience as a saxophonist, having played for more than fifteen years.  From 2005 to 2009, Varner was part of the Jungol rock quartet as an integral songwriter and multi-instrumental artist. In 2018 he began to play as leader of his own project with the release of Blues in the Nude, his first studio album as a conductor. He currently resides in Austin, Texas and has performed live with artists such as Maria Schneider, Joshua Redman and Jennifer Holliday. Varner holds a Bachelor of Arts (Columbus State University 2005) a Master of Music (University of Illinois 2012) and a Doctorate of Musical Arts in Jazz Performance (University of Texas 2015). He is currently an instructor at Eastside Music School in Austin, and teaches improvisation of saxophone, clarinet, flute and jazz with the Austin SoundWaves program (through the Hispanic Alliance). In 2017, he was a saxophone instructor at the Sommergroove music program in Knivsberg, Denmark and again in the summer of 2018.